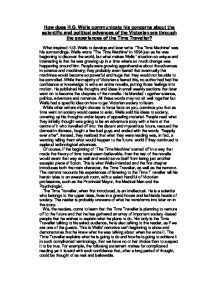 How are the advances of the Victorian era presented in 'The Time Machine'?

How does H.G. Wells communicate his concerns about the scientific and political advances of the Victorian era through the experiences of the Time Traveller? What inspired H.G. Wells to develop and later write 'The Time Machine' was his surroundings. Wells wrote 'The Time Machine' in 1894 just as he was beginning to discover the world, but what makes Wells' situation so unique and interesting is that he was growing up in a time where so much change was happening around him. People were growing apprehensive about the advances in science and machinery; they probably even feared that eventually the machines would become so powerful and huge that they would not be able to be controlled. While the majority of Victorians feared this, no author had had the confidence or knowledge to write an entire novella, putting those feelings into motion. He published his thoughts and ideas in small weekly sections that later went on to become the chapters of the novella. He blended together science, politics, adventure and romance. All these words may not sit well together but Wells had a specific idea on how to get Victorian society to listen. ...read more.

The Time Traveller soon makes his second hypotheses; The future is a world of extremes, created by capitalism, and the human race has divided into two races, the Elois and the 'Morlocks'. The whole of chapter 5 has a very scientific tone yet still retains political undercurrents. Wells is criticising the Victorian society he lives in, again warning them that if the division between the people in the upper classes and those in the working class continues to broaden at the rate it was going, then this would be the end result. Wells also creates a sense of realism amongst the somewhat surreal environment that is the vast future. If the story and its pace were too extreme and implausible, people would not pay attention. By incorporating real science as this safeguard, people would find it difficult to criticise the authenticity of the story. So far, we know the Time Traveller to be an intellectual expert in the field of science. So it comes as quite a surprise when we find out that he is to venture into the world of the Morlocks in order to recover his lost Time Machine. This is his dilemma and it needs to be resolved. ...read more.

By rushing ahead with technological, scientific and political advances, we would only have ourselves to blame when the regrettable choices that we made in the past come back to haunt us. By presenting his ideas through a time travel story, Wells may also be hinting that if these effects that we cause now reach unprecedented levels, there would be no way to travel back in time and prevent it from happening. The Time Traveller returns to the era from which he began his journey and tells the same selection of friends, from the beginning of the story, his experiences of the future. Not only is he talking to the guests, he talks to the reader and hopes they have the same reaction as the surrounding company. He tells them to "take it as a lie - or a prophecy" and the room is filled with a range of emotions. Some believe his story to be true while others dispute it. This reflects reality where the novella was met with a mixed response. One thing was sure though, that the influence of the novella had a definite impact on Victorian society and that H.G. Wells had succeeded in communicating his concerns to a wide range of races, ethnicities and classes. ...read more.