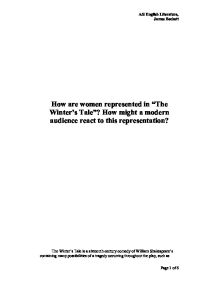 How are women represented in &quot;The Winter's Tale&quot;? How might a modern audience react to this representation?

How are women represented in "The Winter's Tale"? How might a modern audience react to this representation? The Winter's Tale is a sixteenth-century comedy of William Shakespeare's containing many possibilities of a tragedy occurring throughout the play, such as when Hermione 'dies' and Perdita is left in an unpopulated area. The various female characters' representations are significant for the plot. More importantly, with the exception of Paulina, they are portrayed as being passive, obedient characters who are inferior to their male counterparts. A modern-day audience would perhaps disagree with the oppression of women evident within this play, but in the cultural context of Shakespeare's society, women were inferior to men and subsequently expected to obey them without question. The character of Paulina, however, is welcomed by the modern audience as being a more modern character who defends the rights of women, for example Hermione and the abandoning of Perdita. At the time Shakespeare wrote the play, women, more specifically Mary and Elizabeth I, had held the position of monarch in England and it is possible to suggest Paulina is the personification of a new contemporary idea of a female. Paulina, is portrayed as being very strong emotionally, as she is willing to stand up to Leontes and make him see his own faults, but she could also be considered extremely cruel for the emotional punishment and torture she inflicts on Leontes during the sixteen years that he is without Hermione. ...read more.

The throne of Sicily is not only in Paulina's hands, as he cannot marry and have children without her permission, but it is also in Perdita's hands as the Oracle's ruling states that there will not be an heir to the throne unless Perdita is found. Leontes' passing of certain duties to Paulina is Shakespeare's intention of portraying Leontes as a neglectful king who is not capable of doing his job. Leontes pays for his treatment of women in the past by being treated like a woman; as an inferior and being told what to do. Leontes derogates Hermione at the start of the play to Camillo, using disease imagery, suggesting that Hermione's infection has spread to their marriage and subsequently to him, "Were my wife's liver Infected as her life, she would not live The running of one glass." Or: "My wife's a hobby-horse" However, this is a highly ironic statement. Leontes' jealousy is what has infected the marriage and Shakespeare intends to influence the audience into believing that Leontes is ignorant and cannot see how unreasonable he is. This is important for later in the play, where Leontes realises the error of his ways. In comparison to characters like Leontes and Polixenes, Shakespeare has written female characters who are rational, loyal to each other and sensible. ...read more.

However, Leontes' areas of power are shared between the various female characters within the play and this gives the impression that Leontes has lost control and makes the audience feel that the women are in power rather than Leontes. As soon as Leontes loses Hermione and Mamillius he becomes vulnerable and Hermione and Paulina capitalise on this more than anyone. However, Leontes does have the final say as, although Paulina would like for Leontes to wait for her permission before marrying again, he is under no real obligation to do so and can just as easily refuse as accept her proposal. His intense vulnerability is what causes him to give in to Paulina. In conclusion, it could be argued that women are presented as being worthy of more power than they actually possess. In the cases of Paulina and Hermione, the two characters are extremely sensible and know how their roles are limited by the laws of Sicilia. Shakespeare asks the contemporary audience to respect these women and support them over jealous tyrants such as Leontes. I believe that Shakespeare's addition of these characters shows that he believes that despite being expected to be the calm, calculating characters, men can often get out of control and this is ironic as it is not expected of them but it can often happen anyway. The undervaluing of women could be a mistake as they, like Paulina and Hermione, have plenty of intelligence to offer. ...read more.