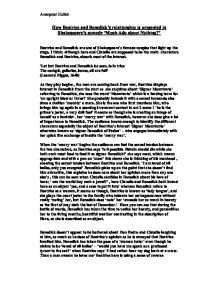 How Beatrice and Benedick's relationship is presented in Shakespeare's comedy 'Much Ado about Nothing?'

How Beatrice and Benedick's relationship is presented in Shakespeare's comedy 'Much Ado about Nothing?' Beatrice and Benedick are one of Shakespeare's famous couples that light up the stage, I think: although hero and Claudio are supposed to be the main characters Benedick and Beatrice, absorb most of the interest. 'Let but Beatrice and Benedick be seen, lo in trice The cockpit, galleries, boxes, all are full' (Leonard Digges, 1640) As they play begins , the men are coming back from war, Beatrice displays interest in Benedick from the start as she enquires about 'Signor Mountanto' referring to Benedick, she uses the word 'Mountanto' which is a fencing term for 'an upright blow or thrust' She probably intends it with a sexual innuendo also since a stallion 'mounts' a mare. She is the one who first mentions him, who brings him up again in a seeming irreverent context in act 2 scene 1 'he is the prince's jester, a very dull fool' it seems as though she is creating an image of herself as a feminist . her 'merry war' with Benedick, however she does give a lot of importance to Benedick. The audience knows enough to identify the different characters especially the object of Beatrice's interest 'Signor Mountanto' otherwise known as 'signor Benedick of Padua' - who engages immediately with her quick fire exchange of insults the 'merry war'. When the 'merry war' begins the audience can feel the sexual tension between the two characters, as Beatrice says 'is it possible Distain should die while she hath such meet food to feed it as signor Benedick?' she says meet, which means appropriate and with a pun on 'meat' this shows she is thinking of his manhood, showing the sexual tension between Beatrice and Benedick. 'I am loved of all ladies, only you excepted' Benedick picks up on the point that she doesn't find him attractive, this explains he does care about her opinion more than any one else's , this can be seen when Claudio confides in Benedick about his love of hero; ' can the world buy such a jewel?' ...read more.

Sits the wind in that corner?' is that how things are? Here surprisingly Benedick doesn't seem disgusted, but entranced, here another part of the mask falls off, he is interested in requiting her love. Claudio, Leonato and Don Pedro are eager to 'hook 'Benedick, 'bait the hook well. This fish will bite' Claudio says this aside excited by the chance to make a fool out of Benedick, as he has usually been targeted by Benedick's scorn. Leonato mentions hero to make the trick more convincing 'she will sit you-you heard my daughter tell you how.' They break Benedick down 'hath a contemptible spirit' that he doesn't have a good nature but a loathsome one, Don Pedro uses this language to make Benedick vulnerable, when someone is vulnerable it is easier to convince them. Then Claudio builds him up 'he is a very proper man,' Suggesting that Beatrice must love him as he is an attractive man. Leonato takes a chance and tells a joke 'she found 'Benedick' and 'Beatrice' between the sheets.' Shakespeare includes Leonato's joke to add, realism to the conversation so it convinces the audience as well that they can perform. 'That' Claudio expresses disappointment that Leonato tells such an old joke so badly. In lines 160-5 Don Pedro begins to carry the joke to a point of mockery of Benedick that endangers the success of the plot, then realises his error and with 'the man doth fear god' corrects it. Don Pedro concludes: 'I could wish he would modestly examine himself to see how much he is unworthy so good a lady' after this Benedick does examine himself, he changes his appearance in act 3 scene 2 this shows the audience that he picked up on Claudio's point that 'he is a proper man' attractive and good looking, hence he tries to improve his appearance that would attract Beatrice. Benedick intersperses this 'secret' discussion with constant asides, demonstrating how he immediately believes what they say. ...read more.

Hero and Claudio present an ideal marriage; young beautiful, rich and equal, but are they? In my opinion Hero and Claudio's relationship is not equal as Hero puts him before herself, and is a match in naivety and immaturity. Hero is the much bigger person as she forgives Claudio in the end for attacking her character. In contrast Beatrice and Benedick are equal in their similarities, their intelligence, wit and views yet one is practical and the other emotional. Shakespeare made sure Beatrice and Benedick are similar so the audience can link them together. Both characters have the convention of romantic comedy against them from the start. The expectation from a romantic comedy demands hat the logical conclusion will be successful pairings of suitable characters. Beatrice and Benedick's posturing has immense dramatic irony. There is strong sense that Beatrice and Benedick's marriage will have an air of pragmatic realism; they already know the worst of each other before they allow themselves to fall in love. Benedick finds it impossible to play the role of courtly suitor expected of him, although he struggles with poetry and fine gestures such as 'come bid me do anything for thee'. He admits his inability to fall into the role as easily as Claudio, and eventually settles for the far more realistic option: being himself, at the end of the play. Beatrice finds it equally hard to become the demure heroine, although her speech is more tempered and far more serous once she has succumbed to love, she maintains her cutting wit right up to her last words: 'I yield upon great persuasion, and partly to save your life, for I was told you were in a consumption' we feel at the end of the play that the relationship will not be perfect however in Benedick's words 'man is a giddy thing', subject to inconsistency and changeability like Beatrice and Benedick's relationship. ?? ?? ?? ?? Amarpreet Hullait ...read more.