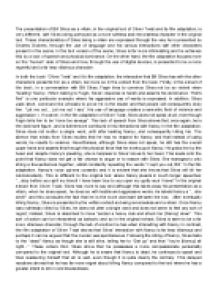 How Bill Sykes is presented in Chapter 47 and the BBC adaptation of &quot;Oliver Twist&quot;.

﻿The presentation of Bill Sikes as a villain, in the original text of Oliver Twist and its film adaptation, is very different, with Sikes being portrayed as a more ruthless and remorseless character in the original text. These characteristics of Sikes being a villain are expressed through the way he is presented by Charles Dickens, through the use of language and his various interactions with other characters present in the scene. In the text version of the scene, Sikes is far more intimidating and he achieves this by a lack of speech and physical dominance. On the other hand, the film adaptation focuses more on the ?human? side of Sikes and how, through the use of digital devices, is presented to be a more regretful and a far less villainous character. In both the book ?Oliver Twist? and it?s film adaptation, the interaction that Bill Sikes has with the other characters presents him as a villain, but more so in the extract from the book. Firstly, in the extract of the book, in a conversation with Bill Sikes, Fagin tries to convince Sikes not be so violent when ?beating? Nancy. When talking to Fagin, Sikes? response is harsh and asserts his dominance: ?Hell?s fire!? is one particular example where his aggressive use of words is expressed. ...read more.

through the little words which he says, what Sikes does say is of importance, because it is spoken in such a concise manner. Dickens also presents in this extract, as Sikes walks into the room where Nancy is, Nancy who appears to be in a situation where, she is pleading him to spare her life. She says to Sikes ?Then spare my life?? which implies how desperate she is, and how Sikes has the upper hand in this situation, in the text. The use of the word ?cried? from the original extract further suggests the urgency in her voice as she tries to justify her actions to Sikes, who has already gone in to the room, with the intent to kill Nancy. Both the use of few lines and the pleading of Nancy are replicated somewhat in the film adaptation; however Nancy does not have the opportunity to explain and justify her actions in the film adaptation. The film uses various camera angles as a device, for example a low angle shot for Sikes, to make him appear more powerful in the situation, and the high angle shot for Nancy, suggesting she is vulnerable and weak. There is a point of view shot, immediately after Sikes has realised he has killed Nancy to suggest the realisation of his own actions, and it helps to see what has happened from the character?s viewpoint. ...read more.

In the novel, Dickens describes him as a 'Robber, Housekeeper' these negative words add to his person as wanting to be the alpha-male. The language Sikes uses is not thought out properly. He says whatever comes into his head and this is why he is always quick to reply. In the film, even though Nancy explains herself, he hits her, and only after hitting her he realises what he has done. In conclusion, the way that Bill Sikes is presented as a villain in both the original novel by Charles Dickens and the BBC film adaptation are quite different. The villainy and the traits of Bill Sikes are portrayed by the language used by Charles Dickens which is short and sharp for fast paced action. The interactions of Bill Sikes with the other characters in the scene and chapter in which Bill Sikes completely ignores Fagin?s warnings and is very brutal to Nancy. Furthermore his villainy is also enhanced by the author?s and the film maker?s craft and use of various devices such as non-diegetic music and how Bill Sikes is called various names in the novel and finally his presentation of a villain is also based upon how he treats Nancy and how he reacts to his surroundings. In the novel he is presented to far more villainous than he is in the BBC film adaptation as in the adaptation there is remorse and regret over Nancy?s death. ...read more.