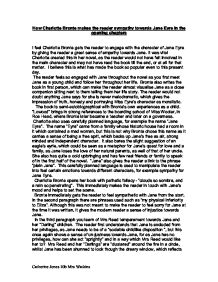 How Charlotte Bronte makes the reader sympathy towards Jane Eyre in the opening chapters I feel Charlotte Bronte gets the reader to engage with the character of Jane Eyre by giving the reader a great sense of empathy towards Jane. It was vital Charlotte created this in her novel, as the reader would not have felt involved in the main character and may not have read the book till the end, or at all for that matter. I believe this is what has made the book so popular even to this present day. The reader feels so engaged with Jane throughout the novel as you first meet Jane as a young child and follow her throughout her life. Bronte also writes the book in first person, which can make the reader almost visualise Jane as a close companion sitting next to them telling them her life story. The reader would not doubt anything Jane says for she is never melodramatic, which gives the impression of truth, honesty and portraying Miss Eyre's character as moralistic. The book is semi-autobiographical with Bronte's own experiences as a child. "Lowood" brings in strong references to the boarding school of Miss Wooler, in Roe Head, where Bronte later became a teacher and later on a governess. Charlotte also uses carefully planned language, for example the name "Jane Eyre". The name "Eyre" came from a family whose historic house had a room in it which contained a mad woman, but this is not why Bronte chose this name as it carries a sense of being a free sprit, which backs up Jane's free as air, strong minded and independent character. It also bares the slight suggestion of an eagle's eyrie, which could be seen as a metaphor for Jane's quest for love and a family, as Jane loses the love of her natural parents, as well of that of her uncle. ...read more.

Jane instinctively lets of a "cry of alarm", but it was too late. The book's force knocked Jane down, bashing and cutting her head on the door as she fell. Jane then tells the reader "my terror had passed its climax; other feeling succeeded." This shows how scared Jane was but also how angry at Master John Reed she must have been, for any small child of Jane's age would have started to cry. However Jane started to shout at John in a fit of rage - "Wicked and cruel boy! You are like a murderer - you are like a slave driver - you are like the Roman emperors." This is the first outburst of Jane's passion, but the reader is not too shocked by this. Jane shows her intelligence in the next line she tells the reader, almost as though she is telling them a secret and she is confiding in them - "I had read Goldsmith's history of Rome, and had formed my own opinion of Nero, Caligula, etc. Also I had drawn parallels in silence, which I never thought I would declare aloud." This makes the reader view Jane as a friend because of the way she is talking about the climax of the fight going on between her and Master John, but stops in the middle to tell the reader something of interest. After this sentence Jane continues to tell the reader about the argument between her and John. John reacts to What Jane has just called him by calling for assistance- "What! What! Did she say that to me? Did you hear her, Eliza and Georgina? Won't I tell mama? But first". Then Master John charges at Jane, head first, grasping her hair and shouting at her "Rat! Rat!" To be called a rat in the Victorian days was quite an insult, as to be called any form animal was insulting for animals were considered a lower form of life then humans and it is a huge drop in the hierarchy and the station God have given them on this Earth. ...read more.

Jane is now extremely scared and was almost hiding behind her hair. Then she muffles her crying in fear that she my wake Mr Reed sole if she does not. "I lifted my head and tried to look boldly around the around the dark room; at this moment a light gleamed on the wall...I thought the swift darting beam was a herald of some coming vision". In this paragraph just before Jane sees the beam of light Bronte once again uses short and sharp sentences to build up tension and fear. Jane talks of this experience as an ordeal- "endurance broke down", which gives the reader the impression Jane has been scared for a long time and is trying to be brave, but she could not take it any more. Jane runs to the door and was desperately retelling the handle. Bessie and Abbot came running to the rescue of Jane. When Jane declares what she has seen Abbot simply snaps back- "she has screamed out on purpose... I know her naughty tricks." This once again shows the attitude if most of people in the reed house the reader has met so far. Then Mrs Reed once again enters the "Red Room" to see why Jane has been let out. She tells Jane to "let go of Bessie's hand child; you will not succeed in getting out by those means, I assure you." Then Miss Reed turns to Bessie and asks why Jane has been let out the "Red Room" with out her permission. Mrs Reed can see Jane is hysterical and crying but Mrs Reed sent Jane back into the "Red Room". Jane was so scared and in such a state of hysteria that soon after she forced to go back in the "Red Room" she passed out. The fact she passed out highlights how scared she was, which Mrs Reed must have seen and still seen her back into the "Red Room". This makes the reader feel awful for Jane and almost feel slightly guilty abut what has happened to her. Catherine Jones 10b Mrs Watkins ...read more.