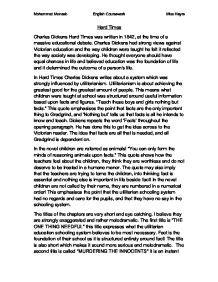 How Dickens Presents the Education System in &quot;Hard Times&quot;.

Hard Times Charles Dickens Hard Times was written in 1842, at the time of a massive educational debate. Charles Dickens had strong views against Victorian education and the way children were taught he felt it reflected the way society was developing. He thought everyone should have equal chances in life and believed education was the foundation of life and it determined the outcome of a person's life. In Hard Times Charles Dickens writes about a system which was strongly influenced by utilitarianism. Utilitarianism is about achieving the greatest good for the greatest amount of people. This means what children were taught at school was structured around useful information based upon facts and figures. "Teach these boys and girls nothing but facts." This quote emphasises the point that facts are the only important thing to Gradgrind, and 'Nothing but' tells us that facts is all he intends to know and teach. ...read more.

I believe they are strongly exaggerated and rather melodramatic. The first title is "THE ONE THING NEEDFUL" this title expresses what the utilitarian education schooling system believes to be most necessary. Fact is the foundation of their school as it is structured entirely around fact! The title is also short which makes it sound more serious and melodramatic. The second title is called "MURDERING THE INNOCENTS" it is an instant attention grabbing title! It seems very extreme and powerful, it explains how the teachers and the schooling system are slowly depriving the pupils of any imagination or emotions. The names of the teachers are also terrifying and excruciating! Could you imagine your first day of school, feeling naive and frightened and then collide with a teacher named Mr M'Choakumchild or Mr Gradgrind? These teachers seem evil, extremely strict and dominant. I believe Dickens chose those names so that the reader feels in this exact way! ...read more.

Overall it is clear throughout the novel that Dickens has an uncompromising prejudice towards the utilitarian education system and the teachers that enforce the system. I believe that Charles Dickens clearly explains his hatred towards the education system, whilst describing the school classroom. In a modern classroom there are posters and display work cluttered all over the classroom, however in a utilitarian school the classrooms are plain and bare. I agree with utilitarian methods to a certain extent however they must also be mixed with a modern influence for the perfect schooling system. However in the 1800's there was no modern mix, it was a strict utilitarian schooling system which I believe is truly wrong. It regards pupils as animals and they have no respect or dignity. Utilitarian methods are definitely essential in modern and pre historic schooling systems however to a certain extent and with a health mix of recreational lessons and not just focusing on 'Fact'. ?? ?? ?? ?? Mohammed Moneeb English Coursework Miss Hayre ...read more.