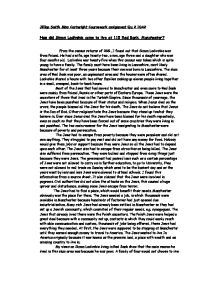 How did Simon Ladivskie come to live at 115 Red Bank, Manchester?

Jillian Smith Miss Cartwright Coursework assignment Qu 2 10A2 How did Simon Ladivskie come to live at 115 Red Bank, Manchester? From the census returns of 1881, I found out that Simon Ladivskie was from Poland. He had a wife, age twenty-two, a son, age three and a daughter who was four months old. Ladivskie was twenty-five when this census was taken which is quite young to have a family. The family must have been living in Lancashire, most likely Manchester for at least three years because their son was born in Lancashire. The slum area of Red Bank was poor, an unpleasant area and the houses were often shared. Ladivskie shared a house with two other families making up eleven people living together in a small, cramped, back-to-back house. Most of the Jews that had moved to Manchester and even more to Red Bank were mainly from Poland, Russia or other parts of Eastern Europe. ...read more.

It also claimed that the Jews were involved in pogroms. Civil authorities did not allow the attacks on the Jews, this caused a huge uproar and disturbance, making some Jews escape from terror. The Jews had to find a place, which would benefit their needs. Manchester obviously was the place for them. The Jews needed a job, in which thousands were available in Manchester because hundreds of factories had just opened due industrialisation. Many rich Jews had already been settled in Manchester so they had set up a Jewish community, which consisted of their regular needs, e.g. synagogues. The Jews that already lived there were the Polish ancestors. The Polish Jews were helped a great deal because with a community set up, contacts in which they could easily reach with able communication and custom, thousands of jobs being offered, these Jews had everything they needed. At first, the Jews were supposed to be stopping at Manchester until they earned enough money to travel to America. ...read more.

From all the information I have gathered, I can evaluate that Simon Ladivskie lived at 115 Red Bank for several reasons. Poverty and persecution are the main reasons for leaving the country he used to live in. I think he moved to Manchester because there was a lot to offer and because there was already a Jewish community set up, he knew that he was welcome because of the amount of Jews already living there. There were also jobs in Manchester and support from other Jews. Living in Red Bank would mainly break down to the money problem because all people that live in the slum, dirty area of Red Bank were struggling to make any money and were desperate. I can conclude that Simon Ladivskie was living at 115 Red Bank because he was poor and struggling to earn a lot of money. He was a tailor, which did not have a great wage, and he was the only person that worked out of his family of four because his wife obviously had to look after the young children. ...read more.