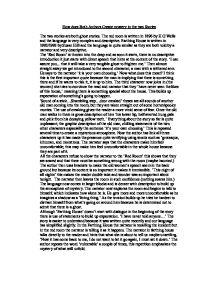 How do Both Authors Create mystery in the two Stories - The two stories are both ghost stories, The red room by H G Wells and Farthing House by Susan Hill.

How does Both Authors Create mystery in the two Stories The two stories are both ghost stories. The red room is written in 1896 by H G Wells and the language is very complex and descriptive. Farthing House is written in 1992/1993 by Susan Hill and the language is quite similar as they are both told by a narrator and very descriptive. The 'Red Room' is thrown into the deep end as soon it starts, there is no descriptive introduction it just starts with direct speech that hints at the content of the story. 'I can assure you... that it will take a very tangible ghost to frighten me.' Then almost straight away we get introduced to the second character, a man with a withered arm. ...read more.

Everything about the story so far is quite unpleasant; the graphic description of the old man, chilling statements of the two other characters especially the sentence 'it's your own choosing.' This is repeated several time to create a mysterious atmosphere. Now the author has link all three characters up it has made the presence quite terrifying using words such as 'grotesque, inhuman, and monstrous. The narrator says that the characters make him feel uncomfortable; this may make him feel uncomfortable in the whole house because they are part of it. All the characters refuse to show the narrator to the 'Red Room' this shows that they are scared and that there must be something wrong with the room (maybe haunted.) The author then uses brackets to make the old women's speech seem in the back ground but because its content is so important it makes it immissible. ...read more.

'I have never told anyone...' The story is easier to understand because it was written quite recently and our language has simplified slightly. In the Farthing House the narrator is recalling the incident but in the red room the narrator is telling it as it happens. The narrator in farthing house talks directly to the reader and hints that what she is about to tell us maybe unsettling. 'Now it has come back to me, I do not want to let it go again, I must set it down.' The author repeats the word 'vulnerable' a couple of times, this repetition emphasizes the mystery of what will unfold. We are then introduced to the scene of action which is described to be beautiful. How ever the author then mentions a 'drifting wood smoke' which contrasts with 'beautiful day, clear and cold and blue.' This wood smoke could be interpreted a shadow hanging over the day and scene. ...read more.