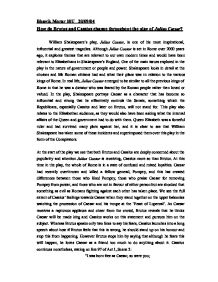 How do Brutus and Cassius change throughout the play of Julius Csar?

Bhavik Morar 10U 20/09/04 How do Brutus and Cassius change throughout the play of Julius C�sar? William Shakespeare's play, Julius Caesar, is one of his most inspirational, influential and greatest tragedies. Although Julius Caesar is set in Rome over 2000 years ago, it explores themes that are relevant to our own modern times and would have been relevant to Elizabethans in Shakespeare's England. One of the main issues explored in the play is the nature of government or people and power. Shakespeare looks in detail at the choices and life Roman citizens had and what their place was in relation to the various kings of Rome. In real life, Julius Caesar emerged to be similar to all the previous kings of Rome in that he was a dictator who was feared by the Roman people rather then loved or valued. In the play, Shakespeare portrays Caesar as a character that has become so influential and strong that he effectively controls the Senate, something which the Republicans, especially Cassius and later on Brutus, will not stand for. This play also relates to the Elizabethan audience, as they would also have been asking what the internal affairs of the Queen and government had to do with them. Queen Elizabeth was a forceful ruler and had survived many plots against her, and it is clear to see that William Shakespeare has taken some of these incidents and superimposed them over this play in the form of the Conspirators. At the start of the play we see that both Brutus and Cassius are deeply concerned about the popularity and attention Julius Caesar is receiving, Cassius more so than Brutus. At this time in the play, the whole of Rome is in a state of confused and mixed loyalties. Caesar had recently overthrown and killed a fellow general, Pompey, and this has created differences between those who liked Pompey, those who praise Caesar for removing Pompey from power, and those who are not in favour of either person but are shocked that something as evil as Romans fighting against each other has taken place. ...read more.

As we see in Act 4 Scene 3 and the surrounding areas of the play, one notices how Brutus becomes much more assertive amongst the other conspirators and begins to overrule not only the other, lesser characters, but also Cassius, the head of the group. Brutus convinces the group to let him change key aspects of the plot, and because of these changes, their plan suffers an unexpected downfall, leading to the death of not only Caesar, but also themselves. As the conspirators group and meet together to discuss aspects of the plot, we see Brutus overruling decisions made by Cassius and enforcing his opinion on the other plot members. Evidence of this is shown in line 189 in Act 2 Scene 1. At this stage, Brutus and Cassius are deciding whether it is necessary to kill Antony whilst killing Caesar. Cassius wants Antony to die, as he fears Antony may arise to become a strong enemy, because of his faithfulness to Caesar, whereas Brutus disagrees, saying, "Our course will seem too bloody". Brutus is almost hypnotized in his willingness to kill Caesar as a sacrifice and makes a deep and thoughtful soliloquy to this effect: "Let us be sacrificers, not butchers, Caius... And not dismember Caesar! But alas, Caesar must bleed for it. And gentle friends, Let's kill him boldly, but not wrathfully; Let's carve him as a dish fit for the gods, Not hew him as a carcass fir for hounds." Brutus feels that what he is doing is not normal, morally wrong murder, but a sacrifice, that once made, will be for the greater good of the state. As it later turns out in the play, one sees that Brutus was flawed in allowing Antony to live. Cassius, being a much better judge of character had rightly thought that Antony, being Consul, would serve to cause them trouble if his position was improved with Caesar's death, and this is so in the battle scenes of Act 5. ...read more.

Brutus sees through this and stays Cassius' comment. He finishes by surmising that: "Our legions are brim-full, our cause is ripe. The enemy increaseth every day; We, at the height, are ready to decline." Cassius stands down and follows Brutus' plan of action, however, this may be purely to do (in context to timescale) with the fact that it is late in the night and that they are both tired and need to rest. As they say good night to each other, it is clear to see that there is an over-the-top atmosphere as both characters try to be nice to each other. Cassius makes an effort to say "Good night my Lord", and Brutus says "Good night good brother". These statements are obviously not heartfelt but artificial. In my opinion, Cassius and Brutus have a very similar likeness in personality, however they are pushed to show it in different stages in the play. At the start, Brutus is a stoic character, and follows the virtue of Zeno the Greek, living his life as a noble, taking things as they come, and being calm, unfeeling, patriotic and selfless. Brutus is habitually calm by nature and believes in principal. Later in the play, he becomes more powerful, just like Caesar and 'falls a victim to those very vices for which he killed his friend, Caesar". Both Brutus and Cassius refer to themselves in the third person in a self-admiring fashion. Cassius is a callous man consumed by jealousy, and at the beginning of the play, was envious of Caesar's growing popularity. He is an observer of men, guided by personal considerations. He has a personal hatred for Caesar as a tyrant, unlike Brutus who hates all tyranny, regardless of who the tyrant actually is. He is easily alarmed and has a 'choleric', rash temper. Both the characters are not actually different, but their personality traits arise at different points in the play in contrast with each other, and this has arised inadvertently in the way William Shakespeare has written the play, Julius Caesar. ...read more.