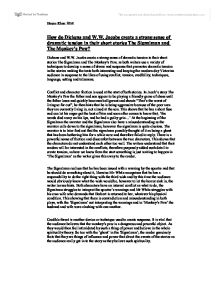 How do Dickens and W.W. Jacobs create a strong sense of dramatic tension in their short stories The Signalman and The Monkey(TM)s Paw?

Herbert's death is revealed slowly. The audience has actually worked out what has happened long before we are told and this allows the full horror of what has happened to sink in. Credibility of the characters is central to the creation of literary suspense. Dickens and Jacobs are careful to provide sufficient detail for their characters to present them to the reader as believable in order for the reader to become engaged by their plight. The White family is very normal, their house and their lifestyle familiar to Jacobs' audience. So too with Dickens' Signalman; he is unremarkable in appearance, vocation and temperament but it is because of the characters' normality that the strange events seem out of place, and unusual as people wouldn't expect such thing's to happen to the average person. Settings in both stories use carefully constructed environments, Look carefully at the vocabulary that both writers use to describe place. The weather in Jacob's story is a pre-cursor to something terrible happening, and the old man's tale reinforces the fear. The attempted destruction of the paw and the reluctance to give it away show the power and fear it strikes in those who have experienced its power. ...read more.

This is what made gothic stories even more appealing and successful during this era - the fact that they would be seen as being realistic. One major reason for the rise in spirituality during this era was the fact that many people had started to lose their Christian faith (mainly because the Church was unable to give an explanation as to why ghosts existed) and so they started to search for a new way of understanding and accepting death. I think that the Victorian's enjoyed reading horror stories because they offer a challenge - to see whether the reader can figure out who the "ghost" or spectre represents and what they are doing. By involving the reader, the writers were able to keep them interested throughout Talismans and ghosts are the main themes for the stories and the whole concepts, as in the 'Signalman' there is a ghost and in 'Monkeys Paw' a supernatural paw that grants three wishes. Both stories result in a death: Herbert's resurrected body is wished away and the grief becomes new again, and the signalman meets his doom in the chilling way that he had seen. In both stories the audience could pretty much see certain thing's coming, but the effect on the audiences would be superb. ?? ?? ?? ?? Hasan Khan 10M ...read more.