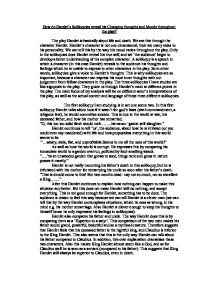 How do Hamlet's Soliloquies reveal his Changing thoughts and Moods throughout the play?

How do Hamlet's Soliloquies reveal his Changing thoughts and Moods throughout the play? The play Hamlet is basically about life and death. We see this through the character Hamlet. Hamlet's character is not one dimensional, their are many sides to his personality. We can tell this by the way his mood varies throughout the play. Only in the soliloquies does Hamlet reveal his true self, and we 'the audience' begin to develop a better understanding of his complex character. A soliloquy is a speech in which a character (in this case Hamlet) reveals to the audience his thoughts and feelings which he is unable to express to other characters in the play. So in other words, soliloquies give a voice to Hamlet's thoughts. This is why soliloquies are so important, because a character can express his most inner thoughts with out judgement from fellow characters in the play. The three soliloquies I have studies are like signposts in the play. They guide us through Hamlet's mind at different points in the play. The main focus of my analysis will be on different actor's interpretations of this play, as well as the actual content and language of these three different soliloquies. The first soliloquy I am studying is in act one scene two. In this first soliloquy Hamlet talks about how if it wasn't for god's laws (sixth commandment, a religious law), he would committee suicide. This is due to the world at war, his deceased father, and how his mother has remarried. "O, this too too solid flesh would melt........his canon 'gainst self-slaughter." ...read more.

It is though the setting dramatises the words that Hamlet speaks. This also is a reason for why in the Mel Gibson version, of this soliloquy, has been cut down. The only similarity there is in both films is that; the actor's never look at the camera. I think that this suggests that Hamlet does not need to prove himself to anyone; he is not trying to convince us, the audience, that his feelings are right (or the right way to think and feel). Hamlet believes that his are beliefs are true and know one will change his mind. Hamlet's character does not need to keep a hold of the audience by addressing them with looks or suggestive posses. So already in this first soliloquy we see how intelligent Hamlet is, how he thinks over situations. He does not just sit back and take things as they come. It is though Hamlet already, sub-consciously, knows that Claudius is unlawfully the king. So from here the audience feels like Hamlet's character is strong minded, intelligent and a deep thinker. At the moment the audience does not know if Hamlet is going to be brave enough to change things. Though, we do get the sense that Hamlet will just take things as they come. This is where the audience claps their first sense that action may happen in the near future. Hamlet is also seen as almost as brave, as it seems he is going to change this to make them seem right. ...read more.

The way none of the script is cut out, makes Hamlet seem as though he is able to work through is feelings and emotions, therefore a more stable and in control character In this soliloquy we see how Hamlets mood has changed more aggressive and more frustrated. Though this seems to work best for Hamlet, as with theses feelings he later is able to come up (finally) with a plot. Hamlets character becomes more complex in this soliloquy. We no-longer think of Hamlet as a man whom will act on his feelings. Now of a man, who is scared to act on his feelings, yet knows he is a coward and he should, but physically he can't. This is maybe because he is not yet mentally prepared. It seems that Hamlet has to be frustrated with his feelings and hate himself for not acting, to then later be able to mentally carry out what he first intended to do. The third soliloquy I am studying is in act three scene one. In this soliloquy Hamlet is still discussing the meaning of life and death. Hamlet is scared of what happens after death. "To be, or not to be...." This is all before a meeting with Ophelia. This soliloquy does not advance the story. Instead it shows us a lot about how Hamlet thinks things through. Also in this soliloquy Hamlet is still delaying murder. Hamlet is spilt; on one hand he wants revenge for his father, on the other, he is an intelligent student which is teachings go against ghosts. This soliloquy is also different to the rest in the way that he reflects on general issues. ...read more.

A solid analysis that shows understanding of language choices and the purpose of Hamlet's soliloquies. At times the expression needs to be more formal and points need to be linked to one another rather than considered in isolation.