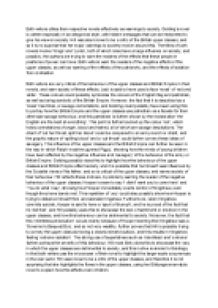 How do Hill and Golding present a warning to society?

Transfer-Encoding: chunked ﻿Both writers utilise their respective novels effectively as warnings to society. Golding?s novel is written especially in an allegorical style, with hidden messages that can be interpreted to give his view on society. Hill was also known to be a critic of the British upper classes, and so it is no surprise that her major warnings to society revolve around this. The titles of both novels involve ?Kings? and ?Lords?, both of which roles have a large influence on society, and possibly, the authors are trying to warn the readers of the effects that these people in positions of power can have. Both writers warn the readers of the negative effects of the upper classes, as well as warning of the effects of the patriarchy, and the effects of isolation from civilisation. Both writers are very critical of the behaviour of the upper classes and British Empire in their novels, and warn society of these effects. Jack is said to have used a face ?mask? of ?red and white?. These colours could possibly symbolise the colours of the English flag and patriotism, as well as being symbolic of the British Empire. However, the fact that it is described as a ?mask? has tribal, or savage connotations, and Golding could possibly have been using this to portray how the British Empire and the upper classes use patriotism as a facade for their otherwise savage behaviour, and this patriotism is further shown by the exclamation ?the English are the best at everything?. ...read more.

The fact that the arrival of the boys impacts a ?scar? upon, the island, as well as creating ?decaying skull-like coconuts? further shows the message that Golding is trying to convey about masculinity. The use of the word ?scar? suggests a sort of permanent damage, and unsightly destruction, and the ?decaying skull-like coconuts? further portray this, as well as conveying messages of death and suffering brought by the arrival of the boys. The idea that the sow - the only female living thing on the island - is killed by the boys further showcases this oppression of femininity by the boys, and Golding?s use of language such as ?inch by inch? and ?eruption? holds graphically sexual undertones, further portrays the destructive oppression of the patriarchy. Golding possibly uses this negative portrayal of the behaviour of boys and men to warn society of the damaging effects of the patriarchy, and a feminist reading of the novel could argue that Golding is trying to bring to light to downfalls of the patriarchy.Hill reflects this in her novel using the portrayal of Mrs Kingshaw. She is seen to be the only prolific female character in the novel, and this in itself portrays the way in which she is isolated. She is said to ?shorten the hem of her skirt?, and this shows how she has no choice but to succumb to the sexual desires of Joseph Hooper, and the oppressive behaviour of masculinity, in the patriarchy which is especially present in the upper classes. ...read more.

The idea that ?all the Warings land had been sold off, piece by piece? furthermore shows how isolated the area of Warings is. This is conjunction with Hooper?s ?relentless persecution? causes Kingshaw to feel this ?extreme isolation?, and it is this isolation which causes Hooper to ?drop down on all fours? and ?slither?. The image of ?all fours? suggests that Hooper is behaving in an animalistic manner and inhumanly, and the image of ?slither? compares Hooper to a snake, known to be cunning and sly. Moreover, Hooper talks about how ?that?s what hunters do?, which shows his possibly violent aspirations. All this in conjunction results in Hooper being portrayed as savage and inhumane, brought about from the isolation of Warings from the rest of civilisation. Hill uses the Gothic style to portray the isolation of the upper classes from the rest of society, and uses this to explain the negative influences of their behaviour on society. She does this similarly to Golding, utilising isolation to convey her personal beliefs on mankind, and both writers warn of the possible effects of isolation from civilisation Overall, both writers present strong ideas in their novels, and utilise the negative events in either novel as a warning to the reader of what could possibly happen in the further. Golding uses Lord of the Flies as a prophetic, allegorical text, to convey his own ideas, while Hill writes in the Gothic style to convey her warnings to the reader. ...read more.