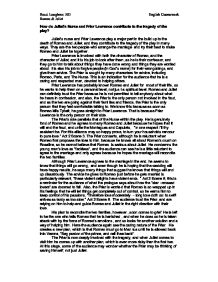 How do Juliet's Nurse and Friar Lawrence contribute to the tragedy of the play?

How do Juliet's Nurse and Friar Lawrence contribute to the tragedy of the play? Juliet's nurse and Friar Lawrence play a major part in the build up to the death of Romeo and Juliet, and they contribute to the tragedy of the play in many ways. They are the two people who arrange the marriage and try their best to make Romeo and Juliet be together. Friar Lawrence is involved with both the character of Romeo, and the character of Juliet, and it is his job to look after them, as he is their confessor, and they go to him to talk about things they have done wrong and things they are worried about. It is also his job to forgive people (in God's name) for their wrongdoings, and give them advice. The Friar is sought by many characters for advice, including Romeo, Paris, and The Nurse. This is an indication for the audience that he is a caring and respected man, devoted to helping others. Friar Lawrence has probably known Romeo and Juliet for most of their life, so he wants to help them on a personal level, not just a spiritual level. Romeo and Juliet can definitely trust the Friar because he is not permitted to tell anybody about what he hears in confession, and also, the Friar is the only person not involved in the feud, and as the two are going against their families and friends, the Friar is the only person that they feel comfortable talking to. ...read more.

The Friar hurries to the vault to be with the waking Juliet. He tries in vain to persuade Juliet to leave the dead Romeo and escape with him, but she refuses so he deserts her. Eventually he reveals the truth to Prince. There is dramatic irony in this scene when Romeo enters the tomb and believes Juliet is dead. The audience are expecting Juliet to wake up and escape with Romeo, but she doesn't awake while Romeo is there. He drinks a potion and dies, and then Juliet wakes up and finds her Romeo dead, so she stabs herself. Shakespeare uses dramatic irony throughout the play when the audience are aware of something the characters are not. The Nurse occupies a similar position in Juliet's life to the Friar in Romeo's. She enjoys her power over Juliet, which is illustrated in her teasing. The Friar enjoys teasing Romeo as well as he does this early on in Act 2 however, unlike the Friar, the Nurse does not have a public position, so when things go wrong, she lacks the courage to face the consequences of her actions. Juliet's Nurse is a common character, who usually speaks in prose, along with the servants. To the audience she appears as a comedy character, and lightens the tone of the tragedy of the play. ...read more.

Act 3 Scene 5. Juliet thinks that the Nurse is being a hypocrite, but we know that she is just trying to be practical and sensible. The Nurse's last duty in the play is to be the one who discovers the drugged, sleeping Juliet. Her grief is intense but it seems a fair price to pay for her betrayal. The Nurse and Friar Lawrence are the only two people that know Romeo and Juliet's secrets and the Nurse is impressed by the way he talks, "O Lord, I could have stay'd here all the night to hear good counsel." Act 3 Scene 3. This shows the audience how uneducated the Nurse is, as she is impressed by the Friar just because he has as educated voice. I believe that Romeo and Juliet died as a result of Friar Lawrence's haphazard plan. He should not have suggested such a dangerous plan, as he was playing with their lives, and also, the Nurse should have stopped Juliet from getting involved with a Montague, or backed her up when she said she wouldn't marry Paris, although if Juliet wasn't frightened of her parents, then she would not have had to go along with Friar Lawrence's risky scheme, and maybe things would have worked out between the pair. ?? ?? ?? ?? Becci Loughran 10D English Coursework Romeo & Juliet ...read more.