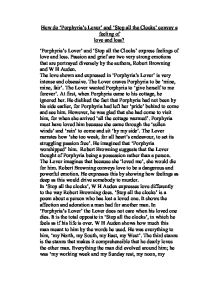 How do 'Porphyria's Lover' and 'Stop all the Clocks' convey a feeling of love and loss?

How do 'Porphyria's Lover' and 'Stop all the Clocks' convey a feeling of love and loss? 'Porphyria's Lover' and 'Stop all the Clocks' express feelings of love and loss. Passion and grief are two very strong emotions that are portrayed diversely by the authors, Robert Browning and W H Auden. The love shown and expressed in 'Porphyria's Lover' is very intense and obsessive. The Lover craves Porphyria to be 'mine, mine, fair'. The Lover wanted Porphyria to 'give herself to me forever'. At first, when Porphyria came to his cottage, he ignored her. He disliked the fact that Porphyria had not been by his side earlier, for Porphyria had left her 'pride' behind to come and see him. However, he was glad that she had come to visit him, for when she arrived 'all the cottage warmed'. Porphyria must have loved him because she came through the 'sullen winds' and 'rain' to come and sit 'by my side'. The Lover narrates how 'she too weak, for all heart's endeavour, to set its struggling passion free'. He imagined that 'Porphyria worshipped' him. ...read more.

W H Auden coveys love as an adoration, a trustfulness and a mutual relationship to have with another person. This contradicts the feeling of love shown in 'Porphyria's Lover'. 'Porphyria's Lover' also deals with another emotion; loss of someone you love. The way this is expressed is very unusual. The person who has lost the loved one, the Lover, feels no grief. He was actually the one who killed Porphyria. I find this very peculiar. After she has been killed, she has a 'smiling rosy head'. The killer is evidently the narrator because he imagines that by killing her he has done 'her darling wish'. I believe that he is insane as well because he has killed someone that he dearly loves. The Lover wanted Porphyria so much that he became obsessed with her. This may have also caused his insanity. If he had not been obsessed or insane, I don't believe he would have killed her. The obsession made him want to have her all the time and the insanity made him kill her to have her. ...read more.

This is an unusual thing to say because the sun is needed for people to survive. Its as if he is no longer needed on Earth, as if he has no point in living. W H Auden conveys a deep sense of loss. He makes the reader picture images using his vocabulary, which is based on everyday things that people would notice like 'policemen' and 'aeroplanes'. 'Stop all the clocks' shows grief, unlike 'Porphyria's Lover'. 'Stop all the clocks' and 'Porphyria's Lover' are based on the same principle of love and loss, but are conveyed totally differently. W H Auden conveys the death of the man as a tragedy. On the other hand, Robert Browning does not convey a loss, but Porphyria has died. W H Auden expresses love as a selfless and pure emotion. Which is differed by Robert Browning, who expresses love as an obsessive emotion. I feel that these poems contradict the saying; 'it is better to have loved and lost, than never to have loved at all'. I believe that these poems suggest this because through the power of love, one of the people has turned insane and the other has lost the will to live. ...read more.