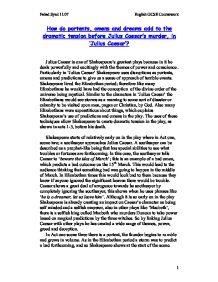 How do portents, omens and dreams add to the dramatic tension before Julius Caesar's murder, in 'Julius Caesar'?

How do portents, omens and dreams add to the dramatic tension before Julius Caesar's murder, in 'Julius Caesar'? Julius Caesar is one of Shakespeare's greatest plays because in it he deals powerfully and excitingly with the themes of power and conscience. Particularly in 'Julius Caesar' Shakespeare uses disruptions as portents, omens and predictions to give us a sense of approach of terrible events. Shakespeare lived the Elizabethan period; therefore like many Elizabethans he would have had the conception of the divine order of the universe being mystical. Similar to the characters in 'Julius Caesar' the Elizabethans would see storms as a warning to some sort of disaster or calamity to be visited upon men, pagan or Christian, by God. Also many Elizabethans were superstitious about things, which explains Shakespeare's use of predictions and omens in the play. The uses of these techniques allow Shakespeare to create dramatic tension in the play, as shown in acts 1-3, before his death. Shakespeare starts of relatively early on in the play where in Act one, scene two; a soothsayer approaches Julius Caesar. A soothsayer can be described as a prophet-like being that has special abilities to see what troubles or fortunes are forthcoming. In this case, the soothsayer tells Caesar to 'beware the ides of March'; this is an example of a bad omen, which predicts a bad outcome on the 15th March. ...read more.

Cassius's reactions to the storm are really noticed in the scene; instead he is more focused on the plot to get rid of Julius Caesar. This shows the audience that Cassius is smart enough to 'construe things after his fashion'. It leaves the audience with two options either God is unhappy with the conspirators or with Caesar. In Act two Scene two, we see one of the main dreams of the play. Caesar is at his house and there is another storm, his reactions to the storm were actually quite different then to Casca, he asks sacrifices to be made and omens to be read all day. As the leader of the country Julius Caesar would feel directly linked to God, so he must feel that as a result to avoid any evil portents he must make a sacrifice. The audience's view of this would be that Julius Caesar is misinterpreting events, which could lead to his death. The main part of this scene is when Caesar's wife, Calaphurnia has a bad dream of evil portents and begs Caesar not to go out. Calaphurnia is afraid, and has had a dream of Caesar statue bleeding from many wounds. This is possibly the only part of the play where the audience knows that Caser will actually be murdered, just by a dream. ...read more.

The dramatic tension started to increase when Julius Caesar was showing arrogance by describing himself as a lion, as Mount Olympus, these are all images of God like greatness. When Caesar starts talking he is very arrogant and uninterested. He does not look at the people he is talking to as he is above them in his own mind. He therefore looks as he is addressing no one in particular as to him, no one else matters. Which in the end had resulted to the death of Julius Caesar. Shakespeare shows in 'Macbeth', that Duncan dies due to a religious offence and it was not greed and ambition that led to it, although Julius Caesar is a different play in terms of themes, the style in which portents are used are basically the same. For example in 'Macbeth', the witches warn Macbeth of the danger he'll come across, similar to Caesar he ignores them. Also when Macbeth had the dream when he had blood all over his hands after killing King Duncan, there was a great build-up of dramatic tension. We find that some of Shakespeare's play are linked, possibly due to that there might have been based on the Elizabethan era, whereby people took portents and omens quite seriously. So by using the style of writing with uses these effects, Shakespeare creates great tension in his plays. Fahad Syed 11.07 English GCSE Coursework 1 ...read more.