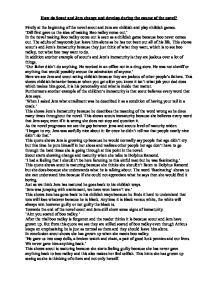 How do Scout and Jem change and develop during the course of the novel?

How do Scout and Jem change and develop during the course of the novel? Firstly at the beginning of the novel scout and Jem are childish and play childish games. 'Dill first gave us the idea of making Boo radley come out.' In the novel making Boo radley come out is seen as a childish game because boo never comes out. The adults of maycomb just leave him alone as he has not been out all of his life. This shows scout's and Jem's immaturity because they just think of what they want, which is to see boo radley, not what boo may want to do. In addition another example of scout's and Jem's immaturity is they are jealous over a lot of things. ...read more.

This shows scouts immaturity because she believes every word that Jem says; even if it is wrong she does not stop and question it. As the novel progresses we see the gap between jems and scouts level of maturity widen. 'I began to cry. Jem was awfully nice about it: for once he didn't tell me that people nearly nine didn't do that.' This quote shows Jem is growing up because he would normally say people that age didn't cry but this time he puts himself in her shoes and realizes other people her age don't have to go through the hard times she is going through at this point in the novel. Scout starts showing change and maturity when she talks to Dolphus Ramond. ...read more.

After the trial boo radley is forgotten and the reader thinks it is because scout and Jem have grown up. But from this quote we see they are stilled scared of boo radley even though Atticus keeps on emphasizing he is just as normal as them and they should leave him alone. In conclusion scout shows she has grown up when she meets boo radley. 'He gave us two soap dolls, a broken watch and chain, a pair of good luck pennies and our lives. We never gave him anything back.' This shows scout is maturing because she starts feeling guilty because she has never gave anything back to boo radley and this also makes her feel selfish. This hints she has grown up seeing as she is thinking of others and not only herself. ...read more.