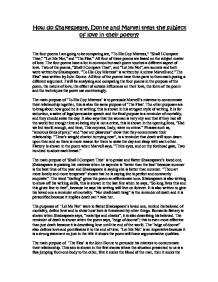 How do Shakespeare, Donne and Marvel treat the subject of love in their poetry?

How do Shakespeare, Donne and Marvel treat the subject of love in their poetry? The four poems I am going to be comparing are, "To His Coy Mistress," "Shall I Compare Thee," "Let Me Not," and "The Flea." All four of these poems are based on the subject matter of love. The four poems have a lot in common but each poem touches a different aspect of love. Two of the poems, "Shall I Compare Thee", and "Let Me Not", are sonnets and both were written by Shakespeare. "To His Coy Mistress" is written by Andrew Marvell and "The Flea" was written by John Donne. All four of the poems have three parts to them each posing a different argument. I will be analysing and comparing the four poems in the purpose of the poem, the nature of love, the effect of outside influences on their love, the form of the poem and the techniques the poets use convincingly. The main purpose of 'To His Coy Mistress' is to persuade Marvell's mistress to consummate their relationship together, this is also the same purpose of 'The Flea'. The other purposes are to brag about how good he is at writing; this is shown in his arrogant style of writing. It is for seduction, a satire of legal persuasive speech and the final purpose is a reminder of mortality, and they should seize the day. It also says that the woman is very shy and that if they had all the world but enough time so being shy is not a crime, this is shown in the opening lines, "Had we but world enough, and time, This coyness, Lady, were no crime." Phrases such as, "amorous birds of prey," and "tear our pleasures" show that they consummate their relationship. "Time's wing�d chariot hurrying near", is a reminder that death will soon dawn upon then and so there is more reason for them to seize the day and sleep with each other. ...read more.

The outside influences affecting love described in 'Shall I Compare Thee' are death and religion." Nor shall death brag", is the influence of death. "Eye of heaven", is the influence of religion, it is also a metaphor and personification of the sun. This poem is different to the others because it says that time does not affect their love because 'she' will live on forever, as long as people can see and read she will be alive. This is shown in the conclusion when it says, "So long as men can breath or eyes can see, So long lives this and this gives life to thee". The outside influences which have an effect on love described in 'Let Me Not' again says that time and death influence their love. The influence of death is described in, "edge of doome"; it describes it to the end of the world. The line, "Lov's not Times foole" shows the influence of time on their love because the time for loving shouldn't be wasted but used to the full. It also says that other people have an influence on their love and this is shown in the "remover to remove" because other people can alter the state of their loving. Basically everything, can affect their love, one word, which describes this, is, "impediment". The outside influences which have an effect on love described in 'The Flea' talks about religion and the Elizabethan science about the flea. Religion is used throughout the second stanza in phrases such as, "Our marriage bed, and marriage temple is", "And cloistered", and, "And sacrilege, three sins in killing three". The religious significance is effective because it describes having sex as being religious. It also says parents' influence their love when Donne says, "Though parents grudge". It even says she herself affects their love because she's not sure whether to consummate their relationship or not and then she ignores him which could definitely have an effect on their relationship.. ...read more.

The extra effective touch Donne added to his poem was to use the blood in the flea as a conceit to describe the love of him and his mistress. The techniques and language used in 'Let Me Not' are very effective. The title itself, 'Let Me Not', is an imperative which gives the poem an argumentative edge. The rhyming couplet at the end has assonance and is a summary of the argument. There are hyperboles such as, "tempests never shaken", and this is because it is nearly impossible for anything not to shake during a storm and that's why it produces a good effect on Shakespeare's love argument. A superlative, "edge of doome" is used because it is saying his love is real until the very last moment, the end of the world. There is an extended metaphor of love and personification with a negative construction in, "Lov's not Times foole. The poem contains a colon which no other poems have. The argument is sophisticated and the last line cancels out the logic and also adds in a touch of wordmanship, it says that he is a fantastic writer. All four of the poems are very persuasive and are written effectively by the poets' techniques. 'Shall I Compare Thee' and 'Let Me Not' are both romantic and flatter the lady Shakespeare is writing for. Both the sonnets make Shakespeare's loved one seem extremely special and Shakespeare does it convincingly. 'To His Coy Mistress' is humorous in places and maintains the politeness throughout the poem. 'To His Coy Mistress' is also very persuasive and Marvell convinces his beloved to consummate their relationship. 'The Flea' is effective because a flea is so insignificant but the way the poet describes it makes it seem so important. All of the poems are very similar and definitely have many similarities between them, the main one is obviously love but they all talk about death being the main outside influence on their love. ...read more.