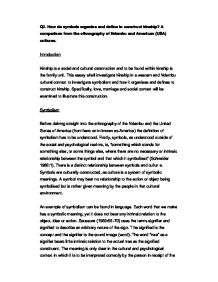 How do symbols organise and define to construct kinship? A comparison from the ethnography of Ndembu and American (USA) cultures.

Q2. How do symbols organise and define to construct kinship? A comparison from the ethnography of Ndembu and American (USA) cultures. Introduction Kinship is a social and cultural construction and to be found within kinship is the family unit. This essay shall investigate Kinship in a western and Ndembu cultural context to investigate symbolism and how it organises and defines to construct kinship. Specifically, love, marriage and social context will be examined to illustrate this construction. Symbolism Before delving straight into the ethnography of the Ndembu and the United States of America (from here on in known as America) the definition of symbolism has to be understood. Firstly, symbols, as understood outside of the social and psychological realms, is, "something which stands for something else, or some things else, where there are no necessary or intrinsic relationship between the symbol and that which it symbolises" (Schneider 1968:1). There is a distinct relationship between symbols and culture. Symbols are culturally constructed, as culture is a system of symbolic meanings. A symbol may bear no relationship to the action or object being symbolised but is rather given meaning by the people in that cultural environment. An example of symbolism can be found in language. Each word that we make has a symbolic meaning, yet it does not bear any intrinsic relation to the object, idea or action. ...read more.

An example is that grand parents often play an active part in their sibling's children's lives therefore a bond is maintained. Love itself is often condensationally symbolised through many different mediums of emotions or acts of emotive behaviour. Sexual intercourse between a husband and wife, genital to genital is a symbol of love as love is symbolic of their marriage. For example, sexual intercourse can also be called "making love" which denotes the link between symbolism and sex. "It defines conjugal love" (Schneider (1968: 50). The symbolism confines husband and wife to only have sexual intercourse with each other. Adultery is seen as deviant by society so in that the control lies and stability in marriage is found. It means that sexual intercourse and love have a symbolic relationship that is one of binding husband and wife together, as those two parties should only practise it. Sexual intercourse also serves another purpose and that is to produce offspring. In America it is the passing of biogenetic material that is symbolic to the relationship of kinship. Biological substance is shared equally from each parent. The result is a child that should look like the parents and they are now joined through blood ties. The familiar appearance of the child through birth is symbolic in that it links the child to the parents and vice versa. ...read more.

(1957: 233) This is paradoxical as it is men who hold social power and women who hold power over kinship. Yet kinship is how social power is organised. Men can only have power if his wife is related to the village headman and is next in succession. This causes fission as women, of whom the matrilineal organisation is obviously dependant, are scattered so it is often left to the individual to stake his claim for power. However, concerning kinship the consummation ritual is a symbol to cool the matrilineal and virilocal conflict that affects this culture. The dark cold black river mud used to signify love also signifies a coolness to be observed among the bride and grooms families: an end to hostilities. The blackness of the mud represents love in this context (often the colour black represents the opposite). Turner qualifies this by saying, "Here blackness plus coldness appear to represent the cessation of hostility between two intermarrying groups"(1967: 74). This has the possible effect that the matriliny will continue to live within a virilocal structure. Conclusion Symbolism is a central factor in organising and defining to construct kinship. In America it is love that symbolises kinship and sexual intercourse symbolises love and a continuation of the bloodline. In Ndembu culture love is also significant as a measure to cool the hostilities that arise around the social structure of kinship. ...read more.