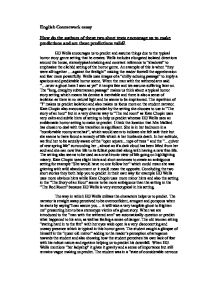 How do the authors of these two short texts encourage us to make predictions and are these predictions valid?

English Coursework essay How do the authors of these two short texts encourage us to make predictions and are these predictions valid? HG Wells encourages us to predict and assume things due to the typical horror story genre setting that he creates. Wells includes elongated isolated directions around the house, stereotypical creaking and constant reference to "shadows" to emphasise the clich�d setting of the horror genre. An example of this is when "they were all together ....against the firelight" making the reader foretell the apprehension and fear more powerfully. Wells uses images of a "chilly echoing passage" to imply a spacious and predictable horror scene. When the man with the withered arm said "...never a ghost have I seen as yet" it tempts fate and we assume suffering later on. The "long, draughty subterranean passage" makes us think about a typical horror story setting which means his demise is inevitable and there is also a sense of isolation as there is no natural light and he seems to be imprisoned. The repetition of "I" makes us predict isolation and also makes us focus more on the student narrator. Kate Chopin also encourages us to predict by the setting she chooses to use in "The story of an hour" but in a very diverse way to "The red room" as Kate Chopin uses very calm and subtle hints of setting to help us predict whereas HG Wells uses an emblematic horror setting to make us predict. ...read more.

Sadness even goes deep in to Mrs Mallards "dreams" and wins the readers sympathy by emphasising her vulnerability and innocence. Kate Chopin diverts us from the likelihood of her death by describing her as "young, with a fair, calm face, whose lines bespoke repression" emphasising her suffering and years ahead along with the description of this repression is backed up when Chopin gives us the reasons for Mrs Mallards monstrous joy. The mention of Mr Mallard's "two white slender hands" emphasises even more her authenticity and innocence making her vulnerable. Chopin tries describing Mrs Mallard like "a goddess of victory" to show her arrogant hubristic behaviour to portray hubris. Wells uses very distinctive and unusual characters to portray a classic horror story with a bit of mystery. He even uses his characters appearances to help us to predict. Chopin uses her customary characters to deceive the reader and to create a certain amount of paradox helping us to predict. Throughout "The Red Room" Wells uses many actions and events to make us predict. Wells intentionally adds a break in the dialogue when the old woman "sways her head from side to side" to make the reader get drawn in to waiting for what she will say next which adds tension as well as a sense of wisdom. ...read more.

The vague repetition of "shadow" encourages the reader to hypothesize misleadingly due to the lack of detail Wells uses. Chopin also encourages us to make false and disingenuous predictions. Chopin tricks us by giving us a justifiable reason for example "protecting Mrs Mallard" deflecting the reader from the possible uncertainty of the husbands death. When Chopin describes Louise as being "paralysed" the reader is tempted to believe she is more saddened than usual when the opposite is the case. Chopin describes Louise as waiting "fearfully" showing us that she thinks it is wrong to be happy and relieved about her husband's death. There is an ironic repetition of her living when Chopin describes her as growing old and "grey" with a "a long procession of years to come" making us predict she will live a long life. Kate Chopin creates a final irony when she describes Louise as dying from "a joy that kills" as the family and the doctor remained convinced that she was grieving for her husband and that she died with joy of her husbands return. Both Authors encourage us to predict for example Wells uses contradictory and ambiguous hints to help the reader to predict falsely. Chopin uses deceptions and irony to make us fallaciously predict. ...read more.