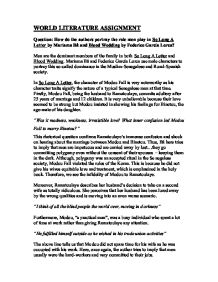 How do the authors portray the role men play in So Long A Letter by Mariama B&amp;acirc; and Blood Wedding by Federico Garc&amp;iacute;a Lorca?

WORLD LITERATURE ASSIGNMENT Question: How do the authors portray the role men play in So Long A Letter by Mariama B� and Blood Wedding by Federico Garc�a Lorca? Men are the dominant members of the family in both So Long A Letter and Blood Wedding. Mariama B� and Federico Garc�a Lorca use male characters to portray this so-called dominance in the Muslim-Senegalese and Rural-Spanish society. In So Long A Letter, the character of Modou Fall is very noteworthy as his character traits signify the nature of a typical Senegalese man at that time. Firstly, Modou Fall, being the husband to Ramatoulaye, commits adultery after 25 years of marriage and 12 children. It is very unbelievable because their love seemed to be strong but Modou insisted in showing his feelings for Binetou, the age-mate of his daughter. "Was it madness, weakness, irresistible love? What inner confusion led Modou Fall to marry Binetou?" This rhetorical question confirms Ramatoulaye's immense confusion and shock on hearing about the marriage between Modou and Binetou. Thus, B� here tries to imply that men are impetuous and are carried away by lust...they go committing polygamy even without the consent of their spouses - keeping them in the dark. Although, polygamy was an accepted ritual in the Senegalese society, Modou Fall violated the rules of the Koran. ...read more.

This vice is further emphasized when Leonardo becomes rude to his wife because of her extended questioning: "Leonardo: bitterly "Why can't you just shut up" Moreover, Leonardo appears early at the wedding day so as to spy at Bride and refresh her memories about their love. He states that his "hands had been tied a long time back", due to his marriage with Wife. He illustrates the societal restriction that is dissuading him from embracing Bride. In addition to that, he describes his desire to take on Bride: "And when they reach their centre, they're unstoppable, like water rising in a deep well" His extreme determination and ardor for Bride's love is exquisite. Here, he foreshadows that he would be not be stopped from running away with Bride - which is the case as we find out later. During this scene, we see Leonardo coming, all alone, before the wedding leaving his wife to follow later on. This shows the lack of togetherness and unity in the marriage of Leonardo - he comes to entice the bride to leave with him! Furthermore, shortly after the marriage of Bride and Bridegroom, we see Leonardo absconding with Bride due to their everlasting love for each other. Albeit Leonardo is married to his wife, he has the impetus which drives him to run away with Bridegroom's wife. This shows us the lack of commitment from Leonardo's side in the marriage. ...read more.

After seeing Bride abscond with Leonardo, he had the will to go and get her back due to his immense love. Even though, Leonardo loved Bride, he had to express his love by breaking the rules of society i.e. he escaped with a married woman. Thus, Bridegroom's character is something different to Leonardo's character because he is committed to his marriage; while Leonardo's not! "I know that I'll find them here" This shows us the determination of Bridegroom to find his beloved wife. This is not the case with Leonardo who just does not spend much time with his wife. Additionally, in the end of the works, Bridegroom fights Leonardo and as a result loses his life in doing so. Although, Leonardo died in that tangle too, he did not do it for his wife. He instead did it for his love while Bridegroom did it for his wife...his commitment and great affinity for her is evident here. In conclusion, we have seen men being portrayed differently by both Mariama B� and Federico Garc�a Lorca. B� and Lorca believe that most men are without commitment and strong will towards their consorts, and get distracted by small pleasures; thus committing polygamy. On the other hand, both these writers believe that there are always exceptions such as Mawdo Ba and Bridegroom who have tried to follow the rules of society, by doing the right thing at the right time. WORD COUNT: 1694 WORDS ...read more.