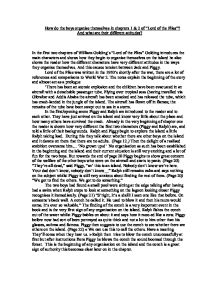 How do the boys organise themselves in chapters 1 &amp; 2 of &quot;Lord of the Flies&quot;? And what are their different attitudes?

How do the boys organise themselves in chapters 1 & 2 of "Lord of the Flies"? And what are their different attitudes? In the first two chapters of William Golding's "Lord of the Flies" Golding introduces the main characters and shows how they begin to organise themselves on the island he also shows the reader how the different characters have very different attitudes in the ways they organise themselves. And this causes tension between Jack and Piggy. Lord of the Flies was written in the 1950's shortly after the war, there are a lot of references and comparisons to World War 2. The notes explain the beginning of the story and almost act as a prologue 'There has been an atomic explosion and the children have been evacuated in an aircraft with a detachable passenger tube. Flying over tropical seas (having travelled via Gibraltar and Addis Ababa the aircraft has been attacked and has released the tube, which has crash-landed in the jungle of the island. The aircraft has flown off in flames; the remains of the tube have been swept out to sea in a storm. In the first/opening scene Piggy and Ralph are introduced to the reader and to each other. They have just arrived on the island and know very little about the place and how many others have survived the crash. Already in the very beginning of chapter one the reader is shown how very different the first two characters (Piggy and Ralph) are, and told a little of their backgrounds. ...read more.

This is very significant to the story and helps build on Jacks character. When the three boys get back to report on what they found they begin to make some rules and conditions. (Page 43) "And another thing. We can't have everybody talking at once. We'll have 'hands up' like at school." Their organisation skills are based on what they already know and been taught at school. This interesting being as there are no grown ups the boys could do what ever they wanted but they stick to rules that applied at school. This perhaps makes them feel more secure being able to refer to something that everyone knows and understands the rule. Then the person with their hand up has the conch and is allowed to speak. (Page 43) "I'll give the conch to the next person to speak." On the island they are trying to make their own society, community and to get everything in order. Here William Golding is showing the reader how people are adapted to they're way of living, when in their home environment the rules may seem like a nuisance but when moved out of their home environment they still apply these rules indicating the dislike to change and life without structure. (Page 44) "We'll have rules!...Lots of rules! Then anyone who breaks 'em..." This seems like the only reason in having rules is so that when one of them breaks them they can punish them. ...read more.

Piggy does not like Jack and he knows the feeling is neutral this affects the organisation on the island as Jack refuses to listen to Piggy and this makes Piggy angry. Jack is a very cold boy and doesn't care a lot for other people's feelings or opinions. He deliberately ignores Piggy even if what he has to say is important. Jack's methods of organisation differ somewhat. Organising people into jobs according to how high they can sing is not really appropriate given the conditions. Jack is really only interested in hunting and killing the pig to make up for his failure to do this last time and to prove himself. In conclusion the way the boys organise themselves is very much affected by conflict and even in the first two chapters break down of structure and organisation is present and things can only get worse unless something is done about it. The beginning of the chapter shows the build up of organisation which happens over a very short space of time indicating that it has not been thought over and very rushed into. Their new found rules and conditions apply for not very long when they break down due to conflict (Piggy, Jack and the conch) and then are almost obliterated at the end of chapter two after the fire. The only way to retrieve organisation is to abolish all the rules and start new going over every detail and conditions, allocating different jobs to people and making all persons equal. Charlotte Field 10P ...read more.