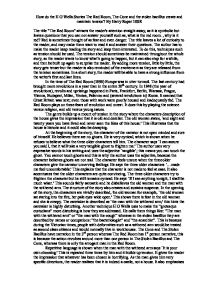 How do the H G Wells Stories The Red Room, The Cone and the stolen bacillus create and maintain tension?

How do the H G Wells Stories The Red Room, The Cone and the stolen bacillus create and maintain tension? By Harry Roper 10SR The title "The Red Room" attracts the reader's attention straight away, as it is symbolic but leaves questions that you can not answer yourself such as, what is the red room. , why is it red? Red is sometimes thought of as fear and even danger. The title leaves a lot of curiosity to the reader, and may make them want to read it and answer their questions. The author has to make the reader keep reading the story and keep them interested. To do this, techniques such as tension should be used. The tension should sometimes be maintained throughout the whole story, so the reader wants to know what's going to happen, but it can also stop for a while, and then be built up again to surprise the reader. By adding more tension, little by little, the story gets tenser but the reader is also reminded of the excitement as they are released from the tension sometimes. In a short story, the reader will be able to have a strong influence from the writer's first and last lines. ...read more.

This suggests there is a building up of tension in the haunted house, and something frightening is going to arise, if three older characters who seem to dislike each other are trembling together in front of the fire. As the narrator is leaving to go to the room, he looks back and sees the old people, `and saw they were all close together, dark against the fire light, staring at me over their shoulders, with an impression of ancient faces.' This adds to the atmosphere and suspense as it gives a disturbing image of fear although you want to read on, to discover what happens. As the narrator leaves, it is shown that he `left and then shut them in.' this illustrates that he is the one who is in charge of the situation, or so he thinks. The fact that he shuts the older characters in leads the reader to believe that he does not want to be near them. There is a passage, a spiral case and a very long corridor in the house. The passage is described by the anonymous narrator as a `chilling, echoing passage.' This illustrates the genre, and the tension builds up. The narrator refers to the passage as `long, draughty subterranean passage was chilly and dusty.' ...read more.

The apprehension is created again by the sounds of the spiral staircase, `the echoes rang up the spiral staircase'. `Echoes' makes the reader wonder if there is anything lurking about the spiral staircase, it enhances the anxiety also. At the end of the story, the character is changed by realizing that it was his mind playing tricks on him. It is his own fears that make him believe the room is haunted. He imagined the most terrifying things that were delusional, which led to the panicking reaction. He says `fear that will not have light nor sound, that will not bear with reason, that deafens and darkens and overwhelms. It followed me through the corridor; it fought against me in the room.' This is how the character describes what fear really is and shows that he realizes the fear of his own fears encouraged him to imagine phantasmal thoughts. The character becomes aware of how powerful the mind is and what imagination can do to you, it can play tricks on one. Fear is conveyed effectively through the plot, characterization, and the language to describe the shadows, the genre and the setting. It could be said that darkness is the most important part of the red room, as darkness seems to what the narrator is most afraid of, `closed upon me like the shutting of an eye,' `wrapped about me in a stiffing embrace.' and `sealed my vision'. ...read more.