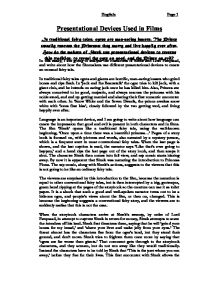 How do the makers of Shrek use presentational devices to reverse this tradition, to reveal the ogre as good, and the Prince as evil?

Presentational Devices Used in Films In traditional fairy tales, ogres are man-eating beasts. The Prince usually rescues the Princess; they marry and live happily ever after. How do the makers of Shrek use presentational devices to reverse this tradition, to reveal the ogre as good, and the Prince as evil? In this essay, I am going to analyse the characters of Shrek and Lord Farquaad, and write about how the filmmakers use different presentational devices to create an unusual fairy tale. In traditional fairy tales ogres and giants are horrific, man-eating beasts who grind bones and rips flesh. In 'Jack and the Beanstalk' the ogre tries to kill Jack, with a giant club, and he intends on eating jack once he has killed him. Also, Princes are always conceived to be good, majestic, and always rescues the princess with his noble steed, and end up getting married and sharing their first romantic encounter with each other. In 'Snow White and the Seven Dwarfs, the prince awakes snow white with 'loves first kiss', closely followed by the two getting wed, and living happily ever after. Language is an important device, and I am going to write about how language can create the impression that good and evil is present in both characters and in films. The film 'Shrek' opens like a traditional fairy tale, using the well-known beginning, 'Once upon a time there was a beautiful princess...' Pages of a story book is focused on, with pictures and words, also narrated by a mystery person, which is a frequent start in most conventional fairy tales. When the last page is shown, and the last caption is read, the narrator says 'Like that's ever going to happen,' and a hand rips the last page out of the story book, and then snaps it shut. ...read more.

This first impression that Lord Farquaad gives the viewers is a negative one. He shows that he is driven by power, and will do anything to get it. It also shows that he has no feelings for others, as he before said, 'some of you may die, but that is a risk I am willing to make!' The makers of 'Shrek' use a parody of 'Blind Date', Lord Farquaad has three beautiful women to choose from. I think the makers of Shrek do this to make the film more up-to-date, and to make it appeal to younger people. Lord Farquaad picks 'bachelorette' number three, the beautiful Princess Fiona. When Lord Farquaad meets the Princess he uses very formal language, 'Beautiful, fair, flower Fiona, will you be the perfect bride for the perfect groom?' This shows that he is also a bit two-faced. Lord Farquaad is all set to marry Princess Fiona, until he sees that when the sunsets she turns into an ogre herself. Lord Farquaad speaks to her in a cruel way, and he orders his knights to 'get that out of my sight.' Lord Farquaad calls off the wedding, but he still proclaims to be king. Lord Farquaad is deceptive because he should only become king if he marries a princess. It is clear that Lord Farquaad does not love the princess, but agrees to marriage because he wants to become king, and ruler of a great Kingdom. In this film we learn quickly that the prince is not like a traditional fairy tale character, because instead of being noble, majestic and loving, he is wicked, thoughtless, and self-centred. When a director is making a film it is important that he/she uses a variety of camera angles to create certain effects. ...read more.

Donkey shows the viewers Shrek's true personality. The Donkey also manages to lighten the atmosphere at the tournament and makes the scene amusing, when he rolls barrels into the knights. Donkey and Shrek have a good relationship, even though it ha its ups and downs. Donkey acts as Shrek's adviser, when Shrek is having difficulties, and Donkey always helps Shrek in every way he can. Shrek, in return, protects and looks after Donkey, and more importantly, will be his friend. Donkey is an important character because he shows us that Shrek isn't a man-eating monster, but is really like any other living thing, that has feelings. Donkey manages to bring the best out of Shrek, even in the most difficult situations. After analysing the characters of Shrek and Lord Farquaad, I have come to the conclusion that although Shrek seems to be like a traditional ogre, he is also very different, as he has friends, he rescues the princess, finds true love and gets married. This shows he is different from a typical ogre. Equally, Lord Farquaad looks like a noble Lord, but is very different to one. He has an evil nature; as he tortures people, he steals, makes other people do his fighting. He is also cruel, and has no feelings for others, shown by the rejection of the princess, and his false claims to be a king. The story of 'Shrek' uses presentational devices to reverse our expectations, so that the end of the film sees Shrek as the good character, and Lord Farquaad is seen as the evil character. The makers of 'Shrek' have successfully managed to reverse this fairy tale and to make it appeal to younger viewers by making it more amusing, but still put across an important message of you can't judge a book by its cover. ?? ?? ?? ?? English: Page 1 ...read more.