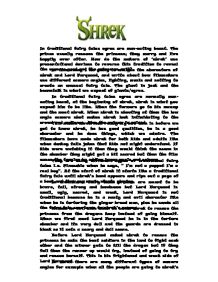 How do the makers of 'shrek' use presentational devices to reverse this tradition to reveal the ogre as good and the prince as evil?

In traditional fairy tales ogres are man-eating beast. The prince usually rescues the princess; they marry and live happily ever after. How do the makers of 'shrek' use presentational devices to reverse this tradition to reveal the ogre as good and the prince as evil? In this essay I am going to analyse the characters of shrek and Lord Farquaad, and write about how filmmakers use different camera angles, lighting, music and setting to create an unusual fairy tale. The giant in jack and the beanstalk is what we expect of giants/ogres. In traditional fairy tales ogres are normally man-eating beast, at the beginning of shrek, shrek is what you expect him to be like. When the farmers go to his swamp and the meet shrek. ...read more.

At the start of shrek it starts like a traditional fairy tale until shrek's hand appears and rips out a page of a book and then rap music starts playing. In traditional fairy tales princes are meant to be brave, tall, strong and handsome but Lord Farquaad is small, ugly, scared, and weak, Lord Farquaad is not traditional because he is a nasty and evil character like when he is torturing the ginger bread man, plus he sends all the fairy tale creatures to shrek's swamp. He has an evil side when he sends shrek to rescue the princess from the dragons keep instead of going himself. When we first meet Lord Farquaad he is in the torture chamber and its very dull and the guards are dressed in black so it sets a scary and dull scene. ...read more.

In shrek the presentational devices are used really well. When they have the blind date game they are mixing traditional with modern. It also has a lot of colour unlike the chamber. Two of the contestants are from other fairy tales. When shrek and donkey are in the castle the music and the atmosphere makes it like a horror film then all of a sudden the dragon crashes through the wall then the music changes to something out of an action film. When the dragon is about to eat donkey, donkey starts flirting with the dragon. The colours of red lave and the low camera angle makes the castle look frightening, the scene is accompanied by scary sound effects. The filmmakers make the dragon scene (potentially dangerous life threatening situation for donkey) less threatening when donkey flirts and the dragon flashes her eyelashes this is the comedic part which kids might no get but still find funny. ...read more.