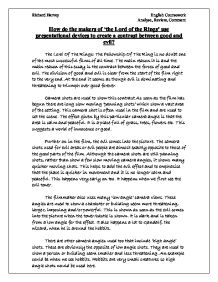 How do the makers of 'the Lord of the Rings' use presentational devices to create a contrast between good and evil?

How do the makers of 'the Lord of the Rings' use presentational devices to create a contrast between good and evil? The Lord Of The Rings: The Fellowship Of The Ring is no doubt one of the most successful films of all time. The main reason it is and the main reason of this essay is the contrast between the forces of good and evil. The division of good and evil is clear from the start of the film right to the very end. At the end it seems as though evil is dominating and threatening to triumph over good forever. Camera shots are used to show this contrast As soon as the film has begun there are long slow moving 'panning shots' which show a vast area of the setting. This camera shot is often used in the film and are used to set the scene. The effect given by this particular camera angle is that the area is calm and peaceful. It is a place full of grass, trees, flowers etc. This suggests a world of innocence or good. Further on in the film, the evil comes into the picture. The camera shots used for evil areas or evil people are almost exactly opposite to those of the good parts of the film. Although the camera shots are still panning shots, rather than show a few slow moving camera angles, it shows many quicker moving shots. ...read more.

This is often accompanied by screams and loud banging in the background. When the first tower/castle shot we see comes you can hear all of this. This is a sensational effect and is a brilliant example of how the contrast between evil and good is shown. Also used in the film to create certain effects is lighting. Using light is a very good effect to show different places in film. For example, in places where evil may be present it is incredibly dark. The sky is always dark (often night-time) and the building are even darker. There is just enough light to see the right details. This often creates a shadow-like effect. An example of this would be when we first see the sight of evil in the film. There is loud banging, screams, panning and low angle camera views as well as limited light and fire. Quite often in the film, where evil is present, the only source of light is fire. Fire can also be associated with hell which can add to the effect of evilness. This is a very good effect and shows the contrast between good and evil very well. This is because in the film where we are seeing 'good', there is sunlight and flowers and grass make the place seem brighter too. Characters body language and their facial expressions are a very good effect in the Lord of the Rings. ...read more.

It is possibly the best aspect of the film but is taken for granted in a way. For the good characters their costume is often white and brown colours with other dull colours. They also have little or no armour, especially compared to the forces of evil. This also makes the viewer feel slightly sympathetic for the good characters. For the forces of evil, however, the costume is very dark colours; blacks, dark browns, etc. They also have good armour, clothing and the faces are very evil. They always look mean, angry, resentful etc. This helps to show the contrast as it shows it shows the characters are evil. The Lord of the Rings is one of the best (if not the best!) films that has ever shown such a clear contrast between the forces of good and evil. This is the main reason to the success of the powerful film. It uses great camera angles, music and sound effects to show this. It uses huge amounts of successful body language and facial expressions, it uses outstanding costume, it uses every ingredient to show the forces of evil and good really are separate and to be a great film. The Lord of the Rings: The Fellowship of the Ring proves that to make a truly great film, you not only need the characters and what they do to be good, you need virtually everything to do with a film. Richard Harvey English Coursework Analyse, Review, Comment ...read more.