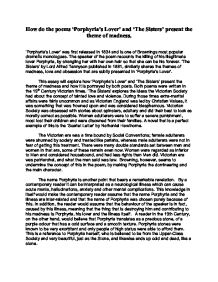 How do the poems Porphyrias Lover and The Sisters present the theme of madness.

How do the poems 'Porphyria's Lover' and 'The Sisters' present the theme of madness. 'Porphyria's Lover' was first released in 1834 and is one of Brownings most popular dramatic monologues. The speaker of the poem recounts the killing of his illegitimate lover Porphyria, by strangling her with her own hair so that she can be his forever. 'The Sisters' by Lord Alfred Tennyson published in 1881, similarly shares the themes of madness, love and obsession that are subtly presented in 'Porphyria's Lover'. This essay will explore how 'Porphyria's Lover' and 'The Sisters' present the theme of madness and how it is portrayed by both poets. Both poems were written in the 19th Century Victorian times. 'The Sisters' explores the ideas the Victorian Society had about the concept of tainted love and violence. During those times extra-marital affairs were fairly uncommon and as Victorian England was led by Christian Values, it was something that was frowned upon and was considered blasphemous. Victorian Society was obsessed with stories about spinsters, adultery and did their best to look as morally correct as possible. Women adulterers were to suffer a severe punishment, most lost their children and were disowned from their families. A novel that is a perfect example of this is the 'Scarlet Letter' by Nathaniel Hawthorne. ...read more.

The lovers grasp on reality seems exceedingly senseless and the reader questions the lovers increasingly insane notions that makes up the lovers mind, having also described her to have 'glided in', like an Angel, a pure being that is the exact opposite of what Porphyria is- an adulterer, who is not afraid to exploit people of mental instability in order to satisfy her own sexual desires. Brownings use of enjambment is another way in which he shows madness in the poem. The lack of punctuation in the poem makes it appear as if it is non-stop, as if the lover is rambling, and disturbingly by himself and a person he had just murdered after his necrophiliac tendencies are first revealed. Free verse allows the poem to seem as if the lover is musing to himself, recounting the details of his day, and in this case making the lover seem more delusional. It also shows the fact that the murder was not planned, it was a spontaneous act provoked by the lovers 'sudden thought' of seeing Porphyria's dead body in his mind and feeling aroused, reinforcing the theme of madness as it shows the lovers lack of control over his emotions. Necrophilia is one element of madness that is shown throughout the end of the poem. ...read more.

Her jealousy over her sister and the fact that the Earl was the cause of her sister's suicide are some factors that could explain the madwoman's need for retribution. Another way the writer creates madness is by the usage of repeated refrain throughout the poem. It acts as pathetic fallacy to show the Sisters increasing madness. The chorus-like phrase goes from 'The wind is blowing in turret and tree' to 'the wind is raving in turret and tree' the verb changes throughout the poem to show her increasing insanity. The Sister skilfully seduces the Earl, luring him into her trap, 'I made a feast; I bade him come...I won his love, I brought him home.', this adds to the madness as it shows the lengths the Sister will go to get what she wants, going as far as to make him fall in love with her in order to get her revenge, 'to win his love I lay in wait'. The phrase 'And after supper, on a bed, upon my lap he laid his head' has a romantic air to it. This is the only part in the whole poem where the stereotypical romantic scene comes in, reappearing when the madwoman- after killing him- 'curl'd and comb'd his comely head'. Again, the Sister comments on the Earls beauty, 'O, the earl was fair to see. ...read more.