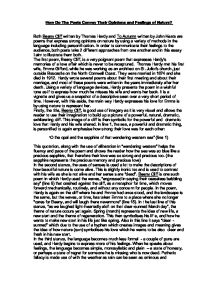 How Do The Poets Convey Their Opinions and Feelings of Nature in the poems To Autumn and Beeny Cliff?

How Do The Poets Convey Their Opinions and Feelings of Nature? Both Beeny Cliff written by Thomas Hardy and To Autumn written by John Keats are poems that express strong opinions on nature by using a variety of methods in the language including personification. In order to communicate their feelings to the audience, both poets take 2 different approaches from one another and in this essay I aim to illustrate them both. The first poem, Beeny Cliff, is a very poignant poem that expresses Hardy's memories of a love affair which is never to be recaptured. Thomas Hardy met his first wife, Emma Gifford, while he was working as an architect on St. Juliot's church, just outside Boscastle on the North Cornwall Coast. They were married in 1874 and she died in 1912. Hardy wrote several poems about their first meeting and about their marriage, and most of these poems were written in the years immediately after her death. Using a variety of language devices, Hardy presents the poem in a wishful tone as if to express how much he misses his wife and wants her back. It is a vignette and gives us a snapshot of a descriptive seen over a very short period of time. ...read more.

The second poem that I am going to discuss is To Autumn by John Keats. It was written in Winchester on 19 September 1819 and first published in 1820. Keats described the feeling behind its composition in a letter to his friend Reynolds, To Autumn is evidence of his way of thinking, as the poem is a vivid, lyrical portrayal of the English autumn, as he imagined it. The poem celebrates autumn as a season of abundance, a season of reflection, a season of preparation for the winter, and a season worthy of admiration with comparison to what romantic poetry often focuses upon - the spring. The poem was written to convey a sense of purpose to life and the worth of death. The poem achieves this by using descriptive and vivid expressions to describe the essence of autumn. The poem uses powerful language to achieve effect. It often makes use of imagery, exaggerated language and onomatopoeias to create an atmosphere of the English autumn for the reader. Autumn has to be the most overlooked season of the year. There are plenty of poems about the regeneration and new life from spring, the beauty of summer, and the festive winter, but this is one of few poems that discusses the splendour of autumn. ...read more.

This is because after autumn comes winter and stanza 3 acts as a sort of valedictory poem with suggestions of death to the approaching winter. To conclude, although my first impression was that John Keats was simply describing the main characteristics of autumn, and the human and animal activities related to it, a deeper reading could suggest that Keats talks about the process of life. Autumn symbolises maturity in human and animal lives. John Keats uses a variety of language techniques to celebrate and romanticize the season, especially highlighting the idea that nature and autumn work together in harmony to produce such wonderful things. Also, the poem is an ode which expresses noble feelings to a person, a place or a thing. This tells me that John Keats felt strongly that autumn should be seen as a very important season to everyone. It could be speculated that To Autumn is a metaphor for existence. Death, or ending, is just as important as life, or the beginning, for without one, there could not be the other. But I believe that it could be simply, that to appreciate the simple things in life, such as the warmth of summer or the new life of spring - the decay of life, and the almost monotonous experience of autumn, is essential to existence. ...read more.