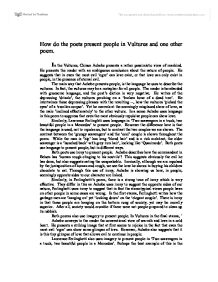 How do the poets present people in Vultures and Two scavengers in a truck, two beautiful people in a Mercedes

How do the poets present people in Vultures and one other poem. In the Vultures, Chinua Achebe presents a rather pessimistic view of mankind. He presents the reader with an ambiguous conclusion about the nature of people. He suggests that in even the most evil 'ogre' can love exist, or that love can only exist in people, in the presence of eternal evil. The main way that Achebe presents people, is the language he uses to describe the vultures. In fact, the vultures may be a metaphor for all people. The reader is bombarded with gruesome language, and the poet's diction is very negative. He writes of the depressing 'drizzle', the vultures perching on a 'broken bone of a dead tree'. He intertwines these depressing phrases with the revolting --, how the vultures 'picked the eyes' of a 'swollen corpse'. Yet he marvels at the seemingly misplaced show of love, as the male 'inclined affectionately' to the other vulture. ...read more.

Through this use of irony, Achebe is showing us how, in people, seemingly opposite sides to our character are linked. Similarly, in Ferlinghetti's poem, there is a strong tone of irony which is very effective. They differ in this as Achebe uses irony to suggest the opposite sides of our nature, Ferlinghetti uses irony to suggest that in fact the stereotypical views people have on other people in some cases are wrong. In the first stanza, Ferlinghetti writes how the garbage men are 'hanging on' yet 'looking down' on the 'elegant couple'. There is irony in that these people are hanging on the bottom rung of society, yet may be morally superior. After all, society would crumble if there were not people prepared to clean up its rubbish. Both poems also use imagery to present people. In Vultures in the final stanza, ` Achebe conveys to the reader the conventional view of warmth and love in a cold heart. ...read more.

However, in 'Two scaremongers in a truck, two beautiful people in a Mercedes' the structure is more for the (image?) than the car. He uses the varied structure to reinforce the point he is making about people. This is a very effective way to present people. For example, lines 31-34 (and the very red light..... between them) are set out to reinforce the point that the idea people are equal is false. 'Between them' is set apart to suggest that there is in fact a huge gap between the two sets of people, and all types of people, that cannot be crossed. In conclusion, both poems present people in different ways. Lawrence Frelinghetti presents the reader with the unavoidable conclusion that social and class divides between people simply cannot be crossed. Chinua Achebe presents the reader with an ambiguous conclusion that in all people, there is lodged will. Both poets use language, in particular, irony, imagery and structure and form in differing ways to present people. In my opinion, Chinua Achebe's presentation of people is more effective. However I feel that the anthropomorphic view of the vultures may be false. Do vultures really feel love? ...read more.

Response to question
The question is fairly broad and encompasses a range of different techniques and ideas. A particular strength of this essay is that it displays extended discussion of both the literary devices used by the poets to present ...

Response to question
The question is fairly broad and encompasses a range of different techniques and ideas. A particular strength of this essay is that it displays extended discussion of both the literary devices used by the poets to present people, and also the effect this has for the reader. Discussing the quotations used in greater depth would gain the candidate marks, and it often seems that some have been used for no reason. Textual reference is important, but so too is relevancy Ã¢â‚¬â€œ therefore quotations should provide evidence to support the candidateÃ¢â‚¬â„¢s argument.

Level of analysis
The candidateÃ¢â‚¬â„¢s frequent use of quotations is good, but there is a need for more development of them, most clearly in the third paragraph, which refers to Ã¢â‚¬Å“Two Scavengers in a Truck, Two Beautiful People in a Mercedes. The analysis is of a higher than average level for GCSE, and is commendable for its range rather than its depth. There are sentences in almost every paragraph which demonstrate the candidateÃ¢â‚¬â„¢s high level of thinking (Ã¢â‚¬Å“There is irony in that these people are hanging on the bottom rung of society, yet may be morally superior. After all, society would crumble if there were not people prepared to clean up its rubbish.Ã¢â‚¬Â), and ability to consider different views and questions the poem raises. The candidateÃ¢â‚¬â„¢s use of many smaller paragraphs, as opposed to fewer, longer paragraphs suggests a lack of development of ideas.

It feels as though the candidate has a better grasp of the imagery and ideas behind AchebeÃ¢â‚¬â„¢s poem Ã¢â‚¬Å“VulturesÃ¢â‚¬Â as the balance of the essay is skewed in its favour, but writing about each poem fairly equally gives a better impression to examiners and will most likely lead to a better essay. The candidate must be aware that although "Vultures" is the named poem in the question, it should not be given disproportionately greater attention in the essay.

Quality of writing
Spelling, grammar and punctuation are all fine, although there are some small errors, such as failing to correctly capitalise the title of Ã¢â‚¬Å“Two Scavengers in a Truck, Two Beautiful People in a MercedesÃ¢â‚¬Â, and in one instance, referring to it as Ã¢â‚¬Å“Two scaremongers in a truckÃ¢â‚¬Â¦Ã¢â‚¬Â A good way to avoid repeating such a long title is to put a note in brackets after the first usage of it, saying Ã¢â‚¬Å“(hereafter referred to as Two Scavengers)Ã¢â‚¬Â. Some quotations also lack speech marks, and this is again a fairly basic error that is most likely a typo, but is one that would cost marks and is extremely easy to fix.