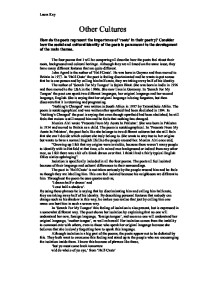 How do the poets represent the importance of 'roots' in their poetry? Consider how the social and cultural identity of the poets is paramount to the development of the main themes.

Other Cultures How do the poets represent the importance of 'roots' in their poetry? Consider how the social and cultural identity of the poets is paramount to the development of the main themes. The four poems that I will be comparing all describe how the poets feel about their roots, background and cultural heritage. Although they are all based on the same issue, they have many different features that are quite different. John Agard is the author of 'Half-Caste'. He was born in Guyana and then moved to Britain in 1977. In 'Half-Caste' the poet is feeling discriminated and he wants to put across that he is one person and by calling him half-caste, they are taking away half of his identity. The author of 'Search For My Tongue' is Sujata Bhatt. She was born in India in 1956 and then moved to the USA in the 1960s. She now lives in Germany. In 'Search For My Tongue' the poet can speak two different languages, her original language and her second language, English. She is saying that her original language is being forgotten, but then discovers that it is returning and progressing. 'Nothing's Changed' was written in South Africa in 1997 by Tatamkhulu Afrika. The poem is autobiographical and was written after apartheid had been abolished in 1994. In 'Nothing's Changed' the poet is saying that even though apartheid had been abolished, he still feels that racism is still around him and he feels that nothing has changed. Moniza Alvi wrote 'Presents From My Aunts In Pakistan'. She was born in Pakistan in 1954 and moved to Britain as a child. The poem is autobiographical. In 'Presents From My Aunts In Pakistan', the poet feels like she belongs to two different cultures but she still feels that she can't decide which culture she truly belong to. She wants to stay true to her origins but wants to have a normal English life like the people around her. ...read more.

As before she uses Mother Nature to depict this. The poet describes this by comparing it to a bud developing to reveal its' full beauty, 'it grows back, a stump of a shoot grows longer, grows moist, grows strong veins'. 'it blossoms out of my mouth.' Another good use of imagery is the phrase that describes the original language taking over the second language, 'it ties the other tongue in knots'. With this phrase, you can visualise the shoot binding in knots, unable to escape while the dominant of the two continues to sprouts upwards. The poet uses this use of imagery to make us see what it is really like for her. She wants us to understand how hurtful, but then superb it is to lose and then recover her essential language. This use of detailed imagery is also used in 'Presents From My Aunts In Pakistan'. This is mainly used when the poet is describing the clothes from Pakistan, 'They sent me a salwar kameez peacock blue'. Using the word peacock immediately makes me visualise the exotic, vibrant colours of the bird's tail. The blue then makes me visualise the rich, deep blues that the clothing could be. 'Candy-striped glass bangles'. This makes me visualise the shiny, sweet colours of a child's candy cane. By including this use of imagery, the poet is making you visualise the wonderful colours and quality of the garments sent to her from Pakistan. These lines truly appeal to your senses. The poet describes the clothes in such a way because she believes that she is not good enough for these clothes and she wouldn't be able to feel truthful whilst wearing these clothes, 'I could never be as lovely as those clothes.' She believes that she is now too western to be wearing these cultural clothes, but it could also just be an excuse not to wear them. ...read more.

The poet is celebrating whom he is and that he is a full, pure person no matter what other people say. As in 'Half-Caste' the poet in 'Search For My Tongue' wants to celebrate her language. She does this by using her original language in the middle of the poem, and also the way that she describes the language returning and progressing in the form of a beautiful flower. The poet is also celebrating her roots and her cultural identity. She celebrates how important it is to her and that she must not lose it as it would be awful. Unlike the previous two poems, the poet in 'Nothing's Changed' is not as enthusiastic about celebrating his roots or cultural identity. He is proud of his identity but he won't stand up to the people around him who are discriminating him, as that is not in his nature. In 'Presents From My Aunts In Pakistan' the poet is celebrating her Asian roots. She does this by describing the traditional clothes from her birthplace in such a way that you can visualise how beautiful and exotic the garments really are. Even though she celebrates this she also wants to be able to feel the same way about her new home in Britain. Even though she says she is, 'of no fixed nationality', the poet still knows in her heart that she wants to celebrate and be proud of her roots in Pakistan. From reading and understanding the four poems, I have learnt that people from ethnic backgrounds can face terrible hardship and that even after large amounts of discrimination drilled into their heads, they still feel proud of their roots and identity. However I have also learnt that by having their roots discriminated against, losing their roots or even not knowing what exactly their roots are, can deeply sadden the people and make them irritated. People react differently to these and we should acknowledge that to make people in situations like those in the poems to feel happier and at ease with themselves. Laura Kay ...read more.