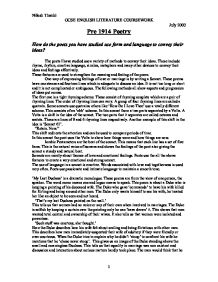 How do the poets you have studied use form and language to convey their ideas?

Pre 1914 Poetry How do the poets you have studied use form and language to convey their ideas? The poets I have studied use a variety of methods to convey their ideas. These include rhyme, rhythm, emotive language, similes, metaphors and many other devices to convey their ideas and feelings affectively. These features are used to strengthen the meaning and feeling of the poem. One way of expressing feelings of love or marriage is by writing a Sonnet. These poems have one stanza and fourteen lines which is adequate to discuss an idea. It is not too long or short and it is not complicated or ambiguous. The following methods all show aspects and progression of ideas put across. The first one is a tight rhyming scheme. These consist of rhyming couplets which are a pair of rhyming lines. The order of rhyming lines can vary. A group of four rhyming lines are called a quatrain. Some sonnets use quatrains others like 'How Do I Love Thee' use a totally different scheme. This consists of an 'abb' scheme. In this sonnet there a two parts separated by a Volta. A Volta is a shift in the idea of the sonnet. The two parts that it separates are called octaves and sestets. ...read more.

This gives us an image of the Duke standing above the small and meaningless Duchess. This tells us that equality in marriage was non existent and discussion and interaction about serious matters hardly took place. The man would think that he could never go to his wife's level by even speaking to her. The Duke was very egotistic and self-centred. He thought that his 'nine hundred years old name' was a gift to his wife. This tells us that names and reputation of those names are important to man's status and his pride. This also shows that woman were supposed to be honoured by their new names. When it came to marriage, wealth and status mattered to a man. Seeing as the Duke was upper class, he considered his wife to be his 'object'. These key examples of the writers use of language, strengthens his case that the Duke was acting suspiciously. The writer uses form and structure in the monologue to create certain ideas and themes. One idea important to the theme is how the style of the dramatic monologue has been written. This totally cancels out the Duchess' opinion on what happened, she is muted. This allows the Duke to tell his side of the argument, without interference. ...read more.

This totally excludes any other option other than the writer's. 'Oh shame, and pity and abasement.' The exclamations at the end of the first two stanzas are aggressive and persuasive. They reinforce her ideas and support the powerful emotional tone of the poem. 'O Lover I refuse you!' The use of connectives, like 'or' and 'but' give structure to her argument. She has one big argument with lots of parts to it. This makes the argument stronger and always puts the reader down with her use of fierce language also backs these parts to her argument up. Christina Walsh uses alliteration in her poem like 'wakened woman'. This draws attention to particular words and adds flow to the poem also giving emphasis to the ideas presented by the writer. The use lists of three, such as 'comrade, friend and mate.' The power of her language reinforces the lists of three and further supports her argument. All of the above features work together to create a strong and effective argument. They also strengthen the meaning and tone of the poem. In conclusion these three types of poems entail use all the common and effective devices to convey their ideas in the best way possible. All of these poems reveal feelings about love and marriage and the poets' opinions on these topics. Nilesh Thanki GCSE ENGLISH LITERATURE COURSEWORK July 2003 1 ...read more.