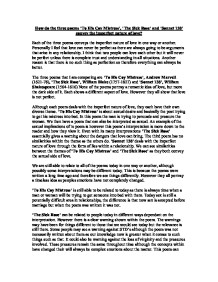 How do the three poems 'To His Coy Mistress', 'The Sick Rose' and 'Sonnet 138' convey the imperfect nature of love?

How do the three poems 'To His Coy Mistress', 'The Sick Rose' and 'Sonnet 138' convey the imperfect nature of love? Each of the three poems conveys the imperfect nature of love in one way or another. Personally I feel that love can never be perfect as there are always going to be arguments that arise in any relationship. I think that two people can love each other but it will never be perfect unless there is complete trust and understanding in all situations. Another reason is that there is no such thing as perfection so therefore everything can always be better. The three poems that I am comparing are 'To His Coy Mistress', Andrew Marvell (1621-78), 'The Sick Rose', William Blake (1757-1827) and 'Sonnet 138', William Shakespeare (1564-1616) None of the poems portray a romantic idea of love, but more the dark side of it. Each shows a different aspect of love. However they all show that love is not perfect. Although each poem deals with the imperfect nature of love, they each have their own diverse theme. ...read more.

'To His Coy Mistress' is still able to be related to today as there is always time when a man or woman will be trying to get someone into bed with them. Today sex is still a potentially difficult area in relationships, the difference is that now sex is accepted before marriage but when the poem was written it was not. 'The Sick Rose' can be related to people today in different ways dependant on the interpretation. However there is a clear warning shown within the poem. The warnings may have been for things different to those that we would see today but the relevance is still there. Some people may see a warning against STD's although the poem was not necessarily written about them as our knowledge now is greater when it comes to such things such as that. It could also be warning against the loss of virginity and the pressures involved. These pressures remain the same throughout time although the concepts within have changed their will always be complex emotions about the matter. ...read more.

It is dark and serious and contains harsh warnings and regret. The first stanza is seductive and passionate whereas the second is more scary and powerful. The second stanza is full of warning and dread. It has an urgent tone. This makes the reader feel guilt. Both of these poems contain some similarities within the tones but William Shakespeare's is completely different to both of them. This poem is more thoughtful and advising. It starts as thoughtful then begins to become questioning. At the end it then develops a tone of resignation. Overall in my opinion 'The Sick Rose' is the poem that depicts the imperfect nature of love best. This is because it is the most serious of the poems and it is the one that contains the most warnings. In the other two poems there is a feeling of happiness. Even in 'To His Coy Mistress' there is a sense of love in the relationship. 'The Sick Rose' however does not give any feelings of happiness but instead reveals a rather dark side of love that nobody would like to be part of. It shows more the pain involved in love. The poem shows that even although people feel love it may not necessarily make them happy. Sian Anderson 10HO ...read more.