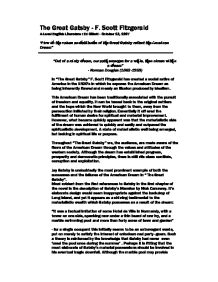 &quot;How do the values and attitudes of the Great Gatsby reflect the American Dream&quot;.

The Great Gatsby - F. Scott Fitzgerald A-Level English Literature : Ed Gillett - October 13, 1997 "How do the values and attitudes of the Great Gatsby reflect the American Dream" "Out of a misty dream, our path emerges for a while, then closes within a dream" - Norman Douglas (1862-1958) In "The Great Gatsby" F. Scott Fitzgerald has created a social satire of America in the 1920's in which he exposes the American Dream as being inherently flawed and merely an illusion produced by idealism. This American Dream has been traditionally associated with the pursuit of freedom and equality. It can be traced back to the original settlers and the hope which the New World brought to them, away from the persecution inflicted by their religion. Essentially it offered the fulfilment of human desire for spiritual and material improvement. However, what became quickly apparent was that the materialistic side of the dream was achieved to quickly and easily and outpaced the spiritualistic development. A state of materialistic well being emerged, but lacking in spiritual life or purpose. Throughout "The Great Gatsby" we, the audience, are made aware of the flaws of the American Dream through the values and attitudes of the western society. ...read more.

Gatsby's popularity amidst society, in fact few people who were in attendance at the parties with Nick Carraway had even met their host and those who were were filled with malicious gossip against him - "a german spy during the war", "I bet he killed a man". As conveyed to us through the aspect of Nick Carraway, the parties serve as a device to expose the values and attitudes of society outside the limited focus of the principal characters. Through the coloured variety of society in attendance at the parties, a common element becomes apparant - the artificial, insincere and hollow nature of the guests themselves. We have already touched upon the sheer disrespect which is shown towards Gatsby as the host of the parties, only Nick shows a genuine desire to meet Gatsby out of courtesy. Other guests, upon being asked if they knew the whereabouts of the host merely "stared at (him) in such an amazed way and denied .. vehemently any knowledge of his whereabouts". As Nick himself had established upon entering the melee of people at his arrival to the party, 'few of the guests had actually been invited'. In it's mildest form, such activity could be described as exploitation, but yet Gatsby allowed this to occur, in the doomed hope that DaisyBuchanan would one day wlak upon the acres of garden in revellry. ...read more.

Myrtle's death at the hands of Gatsby, the American Dream personified, can only be seen as Ironic and esssentially tragic. This desire for more, the 'unexpected' side effect of the American Dream,can also be seen in the corruption of society. Jordan Baker's incident with the golf ball allegations displays how the desire for increased worth in society has driven Jordan to degrade the honesty of society as a whole. The American Dream in "The Great Gatsby" therefore can be viewed as essentially flawed. The artificial equality originally produced by America's frontiers produced competition among equals rather than harmony - common sense and the laws of economics dictate that if one has more, another will have less and thus The American Dream did nothing to aid class differences. In such a light the American Dream is doomed to failure by a society torn apart by class and prejudice. The dream as personified by Jay Gatsby is similarly doomed to failure by society and therein lies the tragic element to Gatsby's death and the allegory which it contains - Myrtle's husband's vengeful act of murder as a representation of class and Gatsby as the American Dream left to die amidst the most elaborate of his material possessions, the marble pool. Idealism eventually destroyed by realism, the harsh reality of the American Dream is exposed through the most poignant of Fitzgerald's novels. ...read more.