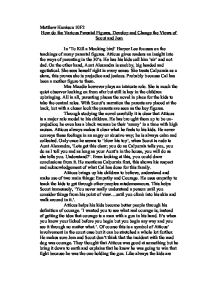 How do the various parental figures, develop and change the views of Scout and Jem in 'To Kill a Mocking bird'.

Matthew Harrison 10F2 How do the Various Parental Figures, Develop and Change the Views of Scout and Jem In 'To Kill a Mocking bird' Harper Lee focuses on the teachings of many parental figures. Atticus gives readers an insight into the ways of parenting in the 30's. He has his kids call him 'sir' and not dad. On the other hand, Aunt Alexandra is snobby, big headed and egotistical. She sees herself right in every sense. She treats Calpurnia as a slave, this proves she is prejudice and jealous. Probably because Cal has been a mother figure to them. Mrs Maudie however plays an intricate role. She is much the quiet observer looking on from afar but still is key in the children upbringing. All in all, parenting places the novel in place for the kids to take the central roles. With Scout's narration the parents are placed at the back, but with a closer look the parents are seen as the key figures. Through studying the novel carefully it is clear that Atticus is a major role model to his children. ...read more.

They thought that Atticus was good at something but he bring it down to earth and explains that he knew he was going to win that fight because he was the one holding the gun. Like always the kids are quick to pick up on this. For young kids they grasp Atticus' somewhat complicated philosophies with un-adulterated ease. Atticus is one man struggling for justice and is used by Harper Lee as a tool to teach the kids morals and equality. In the end he is used to expose the truth that justice will win over prejudice. We don't hear much about the children's mother. Only that she is dead. So, Calpurnia is their mother figure. She is black so the kids grow up without racism in their system and they find it strange when other kids are racist, but they still defend their family's honour when it is abused, 'He's nothing but a nigger-lover!' then Scout's reaction, 'When stalking one's prey, it is best to take one's time.'. Calpurnia also acts as a bridge between the white and black communities. ...read more.

Harper Lee incorporates almost every unpleasant detail possible in a person and puts it into Aunt Alexandra. However, Mrs Maudie is quite the opposite. She is quiet, wise and truthful in her approach and brings Jem and Scout to believe and trust in her. They believe everything she says and trust her with everything. Scout even stops fooling around when Maudie is looking, 'our actions halted once I saw Mrs Maudie looking at us' and she even confides in them what she knows about Boo Radley, 'His name is Arthur and he's alive'. The children respect her and that respect is returned. There is a great friendship between Mrs Maudie, Scout and Jem. Overall Jem and Scout clearly change through the novel. Sometimes at an alarming rate considering the information given to them. They take it in their stride and learn to use it wisely. Should it be Atticus' teachings on empathy and courage right down to Aunt Alexandra contrasting views about the Finch family tree. The novel and it's goings on provide a vital backdrop to what is really happening. The development of Jeremy and Jean Louise Finch. ...read more.