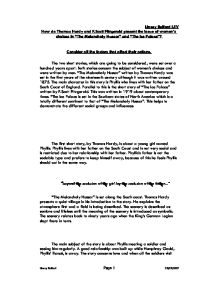 How do Thomas Hardy and F.Scott Fitzgerald present the issue of women's choices in &quot;The Melancholy Hussar&quot; and &quot;The Ice Palace&quot;? Consider all the factors that affect their actions.

Linsey Belford L5V How do Thomas Hardy and F.Scott Fitzgerald present the issue of women's choices in "The Melancholy Hussar" and "The Ice Palace"? Consider all the factors that affect their actions. The two short stories, which are going to be considered, were set over a hundred years apart. Both stories concern the subject of women's choices and were written by men. "The Melancholy Hussar" written by Thomas Hardy was set in the first years of the nineteenth century although it was written around 1875. The main character in this story is Phyllis who lives with her father on the South Coast of England. Parallel to this is the short story of "The Ice Palace" written by F.Scott Fitzgerald. This was written in 1919 about contemporary times. "The Ice Palace is set in the Southern states of North America which is a totally different continent to that of "The Melancholy Hussar". This helps to demonstrate the different social groups and influences. The first short story, by Thomas Hardy, is about a young girl named Phyllis. Phyllis lives with her father on the South Coast and is not very social and is restricted due to her relationship with her father. ...read more.

She is portrayed as down to earth and human by the way in which she acts when around her friends. It is clear to see from the choices that Sally Carrol has to make that she is from a middle class setting from the 1920's. When Fitzgerald describes the North, he uses harsher language and short, sharper sentences. The flow of language is faster and more intense. F.Scott Fitzgerald uses the sentences and the language to create the atmosphere and pace of the story. The first sentence of the second part of the story introduces Harry Bellamy. "Harry Bellamy, tall, broad and brisk..." From the quotation above it shows that short and sharper words can create pace and a new atmosphere. Whenever Harry Bellamy, Sally Carrol's fianc�, is spoken about, the short and quick pace is brought back to the writing and it is easy to distinguish that Harry Bellamy is not from the laid back Southern Georgia like Sally Carrol. Sally Carrol wants to go to places and to meet people and to do this she has made the decision that she is going to go to the North and live with a man whom she met in the summer. ...read more.

All three women had very major and hard decisions to make. They all had to choose what to do, as they could not just live their lives as normal. All three women were in different circumstances and under different social affluences. Sally Carrol is the main woman who could choose to go and then return to her normal life if she disliked it and she took that opportunity. The other two women either had to go or stay. Desiree decided to go and took her life, Phyllis decided to stay and suffer which meant that she did not have a happy life anyway. Life through the years has had a major effect on women's choices and the way they make decisions. If a woman is faced with a major decision today she has the right to do what to do without male interference. Men were respected and if a woman wasn't married, she was not treated the same in society. In the present day, women can have careers without being criticised and live a normal happy life without the need to get married and they are not treated much differently at all. Influences and affluences play a major part in life but in the twenty-first century women can make their own choices and are becoming as dominant as men. Word Count : 1977 Linsey Belford Page 1 03/05/2007 ...read more.