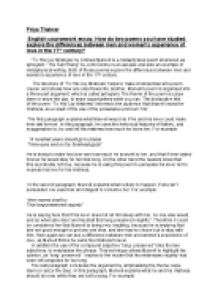 How do two poems you have studied explore the differences between men and womens experience of love in the 17th century?

Marvell uses rhyming couplets to make him seem witty, and clever, to help influence his lover. Whereas Donne uses a more complex rhyming structure which draws in the reader. Both of these rhyming systems help the poem to flow. In ?To His Coy Mistress?, the use of language tells us a lot about how Marvell wants his poem to be interpreted, what his intentions are and what assumes his audience already know. For example he uses allusions, double meanings and pronouns. Also his use of metaphors, similes, and personification enhances these intentions. Firstly, he uses the metaphor My vegetable love should grow This shows that if time lasted forever Marvell would love her slowly and naturally. Vegetables are fresh and healthy, so the poet implies his love for her would be strong. However, this metaphor has a double meaning- double entendre. This is the primary meaning; the secondary meaning could be that he says his vegetable love should grow. Marvell implies that he owns their love, and like a plant should grow he says his love should grow, but it may not. Therefore, he is saying their love should get stronger, because he owns it. Next, he uses the personification: Time's winged chariot hurrying near; Marvell writes that time owns a winged chariot, and assumes that the audience of the poem knows what this statement refers too. ...read more.

Both these two poems use a lot of modal auxiliary verbs such as would, could and can. For example But that I would not lose her sight so long. ?The Sun Rising? The repeated use of this type of verb leads to uncertainty and an indecisive feel to the poems. The semantics of this could be that both poets are hesitant about love. Donne objectifies his partner, showing he thinks women are precious and need to be looked after. However, the pragmatics of this are that women are the property of men. This reflects the time the poem was written in. For example ?She's all states, and all princes I? Therefore, we learn a lot about the poets judgments throughout both poems. Some ideas that Donne writes about are based on the 17th century theory that the sun orbits the earth and the earth is the centre of the solar system. This leads Donne to think that the earth is superior to the sun, so he feels its right to treat the sun like a servant. Finally, as a result both poems show the difference experiences of love between men and women in the 17th century. The view in both poems is that generally, men are superior to women, and women are treated as precious objects rather then people. However, in love although women were allowed an opinion, men?s was more important. ...read more.