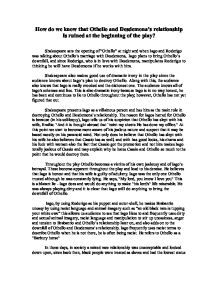 How do we know that Othello and Desdemonas relationship Is ruined at the beginning of the play?

How do we know that Othello and Desdemona's relationship Is ruined at the beginning of the play? Shakespeare sets the opening of "Othello" at night and when Iago and Roderigo was talking about Othello's marriage with Desdemona, Iago plans to bring Othello's downfall, and since Roderigo, who is in love with Desdemona, manipulates Roderigo to thinking he will have Desdemona if he works with him. Shakespeare also makes good use of dramatic irony in the play since the audience knows about Iago's plan to destroy Othello. Along with this, the audience also knows that Iago is really crooked and the dishonest one. The audience knows all of Iago's schemes and lies. This is also dramatic irony because Iago is in no way honest, he has been and continues to lie to Othello throughout the play; however, Othello has not yet figured that out. ...read more.

At this point we start to become more aware of his jealous nature and suspect that it may be based mostly on his paranoid mind. Not only does he believe that Othello has slept with his wife he also believes that Cassio has as well, and with has good looks, his charm and his luck with women also the fact that Cassio got the promotion and not him makes Iago totally jealous of Cassio and may explain why he hates Cassio and Othello so much to the point that he would destroy them. Throughout the play Othello becomes a victim of his own jealousy and of Iago's betrayal. These become apparent throughout the play and lead to his demise. ...read more.

imagery, racist language and manipulation to stir up uneasiness, anger and tension to Brabantio and Othello's relationship later on, and also adds on to the downfall of Othello and Desdemona's relationship. Iago frequently uses racist terms to describe Othello when he is not there, he is often being racist. He refers to Othello as a "Barbury horse" In those days, in society a mixed race relationship was unacceptable and looked down upon, since back then, black people were treated as slaves and had the lowest status in society, daughters were seen as possessions to their fathers and they didn't have the choice of choosing who they wanted to marry, let alone a black man, so adds to more if the scandal of Othello and Desdemona's relationship And it seem as if everyone is against their relationship. ...read more.

The essay engages at an okay level, identifying that Iago's plan contributes to the perception of Othello and Desdemona's relationship. I would've liked to have seen some appreciation of other points which suggest their relationship is damaged, and this could've ...

The essay engages at an okay level, identifying that Iago's plan contributes to the perception of Othello and Desdemona's relationship. I would've liked to have seen some appreciation of other points which suggest their relationship is damaged, and this could've have been done through language analysis. There is some exploration of the audience response, but in my opinion it is not nearly enough. I was asking "Why has Shakespeare done this?" a few times when reading.

The essay is able to pick out a good range of quotes, embedding them well, yet the close analysis is not there. For example, they quote the "black ram" yet the connotations of this image were not explored. I would note that any essay on Shakespeare must include language and imagery analysis to gain the top marks. There is some context latched onto the end, which shows promise, but in my opinion it would've been much more sophisticated if it was woven into the argument. It was quite strange to see the style alter slightly half way in this essay. If you look carefully, the first few paragraphs refer to Shakespeare's construct allowing a natural progression into analysis. Yet, the last few paragraphs refer to the characters as if they choose their actions, lending itself to retelling.

This essay has an okay structure, yet lacks a clear conclusion. In my opinion, there is only one good signpost for the paragraph and that is the third. They need to be concise and clear about what is being explained, allowing the essay to stay focused. The language is colloquial at times, for example "in those days" should be replaced with "a contemporary audience". Other than that, spelling, punctuation and grammar are fine.