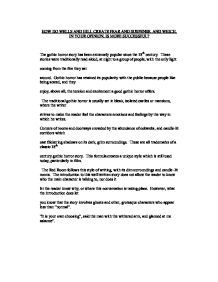 How Do Wells and Hill Create Fear and Suspense, and Which, In Your Opinion, Is More Successful?

HOW DO WELLS AND HILL CREATE FEAR AND SUSPENSE, AND WHICH, IN YOUR OPINION, IS MORE SUCCESSFUL? The gothic horror story has been extremely popular since the 18th century. These stories were traditionally read aloud, at night to a group of people, with the only light coming from the fire they sat around. Gothic horror has retained its popularity with the public because people like being scared, and they enjoy, above all, the tension and excitement a good gothic horror offers. The traditional gothic horror is usually set in bleak, isolated castles or mansions, where the writer strives to make the reader feel the characters emotions and feelings by the way in which he writes. Corners of rooms and doorways crowded by the abundance of cobwebs, and candle-lit corridors which cast flickering shadows on its dark, grim surroundings. These are all trademarks of a classic 18th century gothic horror story. This formula creates a unique style which is still used today, particularly in film. ...read more.

said the old woman". This shows that those who have experienced the horrors of the house do not wish to do so again. Equally, they do not wish for any other person to suffer either, which makes the "ghost" that haunts the Red Room seem very powerful and intimidating. I feel this is a great technique for increasing the suspense in the story. This, I believe, is a very impressive opening to a short story, as it builds up a great deal of tension in such a short period of time. This is in contrast to the calm and tranquil opening of Farthing House, by Susan Hill. This story is not a classic Gothic horror, but a more relaxed, and HOW DO WELLS AND HILL CREATE FEAR AND SUSPENSE, AND WHICH, IN YOUR OPINION, IS MORE SUCCESSFUL? thoughtful ghost story set in recent times. It offers a deeper, more detailed description of its characters and locations than The Red Room's frantic opening. ...read more.

after me, and one fled before me into the darkness overhead.", and also, "its shadow fell with marvellous distinctness upon the white panelling and gave me the impression of someone crouching to waylay me" This way of describing the shadows creates a sense of them being almost alive, Chasing, or waiting behind corners, to catch the main character as he continues his journey, which is a very affective technique that the author uses to creates fear in his story. And finally, there are numerous pauses that the narrator uses, usually just before the opening of doors, or turning corners, "I was about to advance, but stopped abruptly. A bronze group stood upon the landing, hidden from me by the corner of the wall." "I stood rigid for half a minute perhaps." This builds up an enormous amount of suspense for the reader, not knowing what it is that is hidden from view. Finally, the character enters The Red Room. HOW DO WELLS AND HILL CREATE FEAR AND SUSPENSE, AND WHICH, IN YOUR OPINION, IS MORE SUCCESSFUL? ...read more.