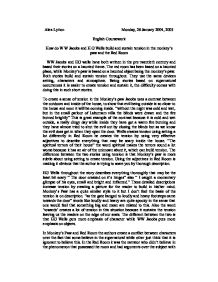 How do WW Jacobs and HG Wells build and sustain tension in the monkey's paw and the Red Room?

Alex Lytton Monday, 26 January 2004, 2003 English Coursework How do W W Jacobs and H G Wells build and sustain tension in the monkey's paw and the Red Room WW Jacobs and HG wells have both written in the pre twentieth century and based their stories on a haunted theme. The red room has been based on a haunted place, while Monkey's paw is based on a haunted object being the monkey's paw. Both stories build and sustain tension throughout. They use the same devices setting, characters and atmosphere. Being stories based on supernatural occurrences it is easier to create tension and sustain it, the difficulty comes with doing this in such short stories. To create a sense of tension in the Monkey's paw Jacobs uses a contrast between the outdoors and inside of the house, to show that evil being outside is so close to the house and soon it will be coming inside. ...read more.

Using the adjectives in Red Room is making it obvious that the author is trying to scare you by thorough description. HG Wells throughout the story describes everything thoroughly that may be the least bit scary " The door creaked on it's hinges" also " I caught a momentary glimpse of his eyes, small and bright and inflamed." These detailed descriptions increase tension by creating a picture for the reader to build in his/her mind. Monkey's Paw has a quite similar style to it but I don't feel the basis of the tension is on description. "as the gate banged to loudly and heavy footsteps came towards the door" words like loudly and heavy are quite spooky in the sense that one would feel that something big and mean are related to this. Also the word 'towards' creates a lot of tension in this situation because it sustains the tension leaving us the readers on the edge of our seats. ...read more.

We see that the something has somehow broken this man's spirit and because of the title we think it is the monkey's paw. The atmosphere of the stories creates a lot of tension because tension can be sensed through atmosphere. In Monkey's Paw they use words in a normal sentence to create tension. "Well, it's just a bit of what you might call magic." At this point the tension began to really build because the thought of magic being in the story is now known to the reader. Magic can build tension because from other stories we find that magic does not always go to plan. In Red Room HG Wells has a slightly different style he describes an object to show the amount of tension being created in the atmosphere "small, bright and inflamed" with each word more tension is being built. WW Jacobs and HG Wells build and sustain tension by using character conflicts, description of atmosphere and description of setting. I think that the tension was built and sustained very entertainingly in both stories.- ...read more.