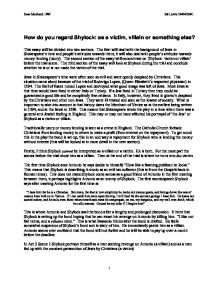 How do you regard Shylock: as a victim, villain or something else?

How do you regard Shylock: as a victim, villain or something else? This essay will be divided into two sections. The first will deal with the background of Jews in Shakespeare's time and people's attitudes towards them, it will also deal with people's attitudes towards money-lending (usury). The second section of the essay will concentrate on 'Shylock- victim or villain' before the trial scene. The third section of the essay will look at Shylock during the trial and conclude whether he is or is not made the victim of the trial. Jews in Shakespeare's time were often seen as evil and were openly despised by Christians. This situation came about because of the trial of Roderigo Lopez, (Queen Elizabeth's respected physician) in 1594. The Earl of Essex ruined Lopez and destroyed what good image was left of Jews. Most Jews at this time would have lived in either Italy or Turkey. If a Jew lived in Turkey then they could be guaranteed a good life and be completely free citizens. In Italy, however, they lived in ghetto's despised by the Christians and other non-Jews. They were ill-treated and seen as the lowest of society. ...read more.

Cursed be my tribe if I forgive him" This is where Antonio and Shylock seal the bond after a lengthy and prolonged discussion. It hints that Shylock is setting up the bond hoping that he can exact his revenge on Antonio by killing him. "I like not fair terms, and a villains mind." This is what Bassanio thinks after the bond is drafted. He feels somewhat suspicious of Shylock's bond and is wary of him. He immediately paints him as a villain. Antonio seems over confident that the bond will not forfeit and he will be able to pay up over a month before the deadline. In Act 3 Scene 1 Shylock portrays himself as a man seeking revenge on Antonio (a villain) and as a man fed up with the constant persecution of Jews by Christians (a victim) "To bait fish withal. If it will feed nothing else, it will feed my revenge. He hath disgraced me, and hindered me half a million, laughed at my losses, mocked at my gains scorned y nation, thwarted my bargains, cooled my friends, heated mine enemies and what's his reason? I am a Jew" This speech suggests that Shylock is intent on murdering Antonio with his bond. ...read more.

Be merciful, take thrice thy money, bid me tear the bond." Shylock still refuses though and is still intent on killing Antonio "Ay, his breast, so says the bond, doth it not noble judge? 'Nearest his heart' those are the very words" From this point onwards things take a turn for the worst. Portia says that Shylock has attempted murder and will lose half of his possessions to his daughter and half to the state. He will also lose his house and all his money "Nay take my life and all, pardon not that. You take my house, when you do take the prop that doth sustain my house; you take my life, when you do take the means whereby I live." In conclusion, up to and during most of the trial it is clear that Shylock is a villain who is obsessed with making sure his arch enemy Antonio (which can be interpreted as Christianity overall) is killed. This means he seems to be a villain. Yet he is made a victim when he loses his house, money everything for 'attempted murder'. This seems an overly harsh punishment for a Jew who was just getting his revenge after many years of persecution form Christians and Antonio. He is both a villain and a victim. Ross Maitland 10W Mr Lewis 30/04/2001 1 ...read more.