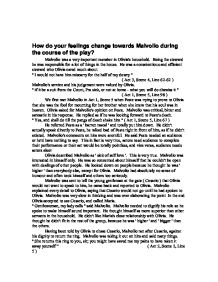 How do your feelings change towards Malvolio during the course of the play?

How do your feelings change towards Malvolio during the course of the play? Malvolio was a very important member in Olivia's household. Being the steward he was responsible for a lot of things in the house. He was a conscientious and efficient steward who Olivia cared much about. '' I would not have him miscarry for the half of my dowry '' ( Act 3, Scene 4, Line 62-62 ) Malvolio's service and his judgement were valued by Olivia. '' if it be a suit from the Count, I'm sick, or not at home - what you will do dismiss it '' ( Act 1, Scene 5, Line 98 ) We first met Malvolio in Act 1, Scene 5 when Feste was trying to prove to Olivia that she was the fool for mourning for her brother when she knew that his soul was in heaven. Olivia asked for Malvolio's opinion on Feste. Malvolio was critical, bitter and sarcastic in his response. He replied as if he was looking forward to Feste's death. '' Yes, and shall do till the pangs of death shake him '' ( Act 1, Scene 5, Line 67 ) ...read more.

Before Malvolio picked up the letter which Maria forged, he was already thinking about marrying Olivia. He was going through all the hints and signs that he thought Olivia had given to him. '' Maria once told me she did affect me; and I have heard herself come thus near that, should she fancy, it should be one of my complexion. '' ( Act 2, Scene 5 , Line 20 - ) Thoughts of Olivia filled his mind and the possibility that she might love him. He had been 'practising behaviour to his own shadow this half hour '. It gave us a picture ( or as in the video that we saw ) that he was in the garden, practising his movements and gestures. Then he thought himself as ' Count Malvolio ', calling for Sir Toby and telling to stop getting drunk, and referred Sir Andrew Aguecheek as a ' foolish knight '. Fabian joined and gave us another reason for tricking Malvolio because Malvolio had reported Fabian for bear baiting, which was a sport that Puritans disliked. Malvolio was in the right frame of mind to be deceited by the wicked plan. ...read more.

Though you have put me into darkness and given your drunken cousin rule over me, yet have I the benefit of my senses as well as your ladyship. '' ( Act 5, Scene 1 , Line 290-293 ) Malvolio returns, clutching the love letter sent by ' Olivia ', as an evidence that she has 'misused ' him. The things Malvolio said between line 317 to line 331 was very touching, he was saying all the things that he had suffered. '' Tell me why '' ( line 331 ) Malvolio asked Olivia, he really couldn't believe why this had happened to him. Malvolio found out the truth that the letter was written by Maria, and everything was a set up. Then Feste came up, and explained everything. Feste kept quoting from the forged letter, and revealed that he was Sir Topas. Feste remembered when Malvolio said to Olivia, '' Madam, Lord, why laugh you at such a barren rascal? An you smile not he's gagged '. This explained why Feste brought his revenge on Malvolio. Malvolio, as Olivia said, was indeed ' notoriously abused ' and threatened to have his revenge on everyone. Malvolio was excluded from the happiness and good fortune of the other main characters, and he left, on his own, drowned in sorrow. ...read more.