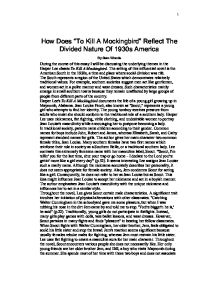 How Does "To Kill A Mockingbird" Reflect The Divided Nature Of 1930s America By Sam Woods During the course of this essay I will be discussing the underlying themes in the Harper Lee classic To Kill A Mockingbird. The setting of this influential novel is the American South in the 1930s, a time and place where social division was rife. The South represents a region of the United States which demonstrates relatively traditional values. For example, southern societies suggest men act like gentlemen, and women act in a polite manner and wear dresses. Such characteristics mainly emerge in small southern towns because they remain unaffected by large groups of people from different parts of the country. Harper Lee's To Kill A Mockingbird documents the life of a young girl growing up in Maycomb, Alabama. Jean Louise Finch, also known as "Scout," represents a young girl who attempts to find her identity. The young tomboy receives pressure from adults who insist she should conform to the traditional role of a southern lady. Harper Lee uses nicknames, fist fighting, virile clothing, and undesirable women to portray Jean Louise's masculinity while encouraging her to postpone becoming a lady. In traditional society, parents name children according to their gender. Common names for boys include John, Robert and James, whereas Elizabeth, Sarah, and Cathy represent standard names for girls. The author gives her main character two common female titles, Jean Louise. Many southern females have two first names which reinforce their role in society as a Southern Belle, or a traditional southern lady. Lee contrasts this extremely feminine name with her masculine label, Scout. "'Scout, I'm tellin' you for the last time, shut your trap or go home - I declare to the Lord you're gettin' more like a girl every day'" (p.52). It seems interesting Lee assigns Jean Louise such a manly name. Although the nickname accurately describes her personality, it does not seem appropriate for female society. Also, Jem condemns Scout for acting like a girl. ...read more.

Traditional thinking was being transformed into ideas and thoughts that had never been considered before, and old traditions were pitted against new ones. Looking into the Deep South, in a little town named Maycomb, tradition for most people meant prejudice, separation, and racism. Atticus Finch chooses to fight against this "old tradition" with traditions of his own. Because of his highly ethical character, Atticus is able to honourably defend Tom Robinson and promote a "new tradition" for himself and his children. Respect, dignity, and equality form the backbone of Atticus' belief system, a belief system containing qualities that are often overlooked in the traditional South. In the absence of outside support, Atticus fights his battle the only way he knows how -- with patience, perseverance, and honesty. The South and tradition are synonymous. Southerners are known to be proud of their traditional beliefs. To Kill A Mockingbird serves as a piece of literature that allows its readers to question and consider those southern beliefs. Maycomb represents a typical old southern town. Not many people move into Maycomb and not many people who live there journey beyond its boundaries. As a result, the opinions held by many of the citizens of Maycomb are left to grow and foster in the same families for many generations. The circumstances in Maycomb are less than ideal for generating change and more prone to sustaining traditionally accepted codes. Two codes embedded within southern social beliefs are class and race. Class and family history is an important part of tradition to many of the people in Maycomb. When Aunt Alexandra comes to visit, she feels it her duty to impress upon Scout the importance of her roots. Aunt Alexandra forces Atticus to explain to Scout that she is "not from run-of-the-mill people, [but] the product of several generations' gentle breeding"(p.133). Aunt Alexandra feels that people are born into a certain class, and should, therefore, behave accordingly. ...read more.

After the trial, Jem and Scout don't care what people say about their "nigger-loving" father. It does not matter because he has bestowed upon them a new tradition of thinking. Jem and Scout do not think in terms of class and race. Scout does not have to think hard to know that she would "let Tom Robinson go so quick the Missionary Society wouldn't have time to catch its breath"(p.234) if it was up to her, and if Jem had been on the jury "Tom would be a free man"(p.220). Atticus is pleased by his children's views. Atticus has one wish entering into the trial and that is that Jem and Scout get through it "without catching Maycomb's usual disease"(p.88). The "disease" Atticus does not want them to catch is the set of the traditional views that will interfere with their reasoning process. Atticus' comment for the jury is that "There's something in our world that makes men lose their heads -- they couldn't be fair if they tried"(p.220). That "something" is tradition, and Atticus does his small part in attempting to reshape it. After realizing that he is fighting an uphill battle, it is Atticus' integrity that keeps him pushing forward. He sees the problems with southern traditional social codes and he realizes they must be redefined -- for the sake of his children, and his children's children. Atticus knows that one of these days someone is "going to pay the bill for it"(p.221). He realizes that traditional beliefs will not be changed over night, and he does not expect it. His solution to his dilemma is to stick firmly to his southern tradition and his beliefs. Atticus Finch is a true Southern gentleman. His courage, nobility, pride, and honesty allow him to do what few men at the time could do. Atticus does not fool himself by ignoring the inevitable. He accepts his position and attacks the traditional views that he does not believe in like a true gentleman -- face to face. ?? ?? ?? ?? 1 ...read more.