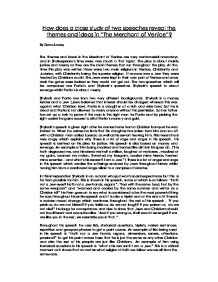 How does a close study of two speeches reveal the themes and ideas in &quot;The Merchant of Venice&quot;?

How does a close study of two speeches reveal the themes and ideas in "The Merchant of Venice"? By Dave Lacey The themes and ideas in the Merchant of Venice are very controversial nowadays and in Shakespeare's time were very much a 'hot topic'. The play is about mainly justice and mercy as they are the main themes that run throughout the play. At the time this play was written there were two main religions in Venice, Christianity and Judaism, with Christianity being the superior religion. If anyone was a Jew they were treated by Christians as dirt. The Jews were kept in their own part of Venice and once dark the gates were locked so they could not get out. The two speeches which will be compared are Portia's and Shylock's speeches. Shylock's speech is about revenge whilst Portia's is about mercy. Shylock and Portia are from two very different backgrounds. Shylock is a money lender and a Jew (Jews believed that interest should be charged whereas this was against what Christian law). Portia is a daughter of a rich and wise Lord, but he is dead and Portia is not allowed to marry anyone without his permission. So her father has set up a task to prove if the man is the right man for Portia and by picking the right casket he gains access to all of Portia's money and gold. ...read more.

If we are like you in the rest, we resemble you in that." Throughout his speech he uses lists, rhetorical questions, triplets, varied sentences, repetition and grouped phrases to get a point across. An example of lists being used in his speech is "Hath not a Jew hands, organs, dimensions, senses, affections, passions?" To get his point across here that he is just the same as any other Christian and also the rest of his people are just like Christians. An example of him using rhetorical questions in his speech is "what's his reason? I am a Jew." This is a critical moment as it shows that no matter what religion of faith we follow we are all from the same race. Shakespeare says through Shylock that this is the only reason why Shylock is treated differently which is because he follows a different religion. Shakespeare appears to recognise the same humility in us all. The themes this speech reveals are revenge, money and justice. Shylock wants justice for his people so he not is willing to show mercy, revenge for how his people are treated and money because that's what starts all this in the first place that Antonio has not paid back the 'merry bond' in time. You can also say that Shylock is very bloodthirsty because he wants a pound of Antonio's flesh taken from his breast closest to Antonio's heart inflicting 'as much pain as possible whilst he still lives'. ...read more.

Through out her entire speech she uses a lot of repetition; the words mercy and plea are repeated virtually every section of her speech. This is because whilst getting hr point across she also wants you to remember what she has said by repeating the higher the likelihood of the speech being. Also in the last line she says is when she uses the strongest language throughout the entire speech. "Must needs give sentence 'gainst the merchant there." The themes that are revealed through Portia's speech are justice and mercy. Justice is also featured in Shylocks speech and therefore leads me to think that justice is one of the themes that run through out the play just like mercy and justice as the two are tied like stated in Portia's speech. "When mercy season justice" To conclude and to answer the question, how does a close study of two speeches reveal the themes and ideas in "The Merchant of Venice"? A close study of the two speeches reveals the themes and ideas throughout the rest of the play by seeing what the two speeches have in common. This is that both speech themes are around revenge, justice and mercy seeing as the two are tied together. Money is also another theme in both speeches because both speeches would not have been necessary if Antonio paid his 'merry bond' on time. ...read more.