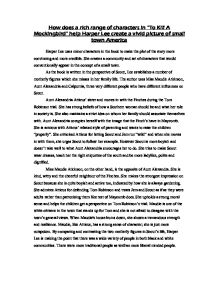 How does a rich range of characters in "To Kill A Mockingbird" help Harper Lee create a vivid picture of small town America Harper Lee uses minor characters in the book to make the plot of the story more convincing and more credible. She creates a community and set of characters that would conventionally appear in the concept of a small town. As the book is written in the perspective of Scout, Lee establishes a number of motherly figures which she misses in her family life. The author uses Miss Maudie Atkinson, Aunt Alexandria and Calpurnia, three very different people who have different influences on Scout. Aunt Alexandria Atticus' sister and moves in with the Finches during the Tom Robinson trial. She has strong beliefs of how a Southern woman should be and what her role in society is. She also maintains a strict idea on whom her family should associate themselves with. Aunt Alexandria occupies herself with the image that the Finch's have in Maycomb. ...read more.

When Maudie's house burns down, she shows a tremendous strength and resilience. Maudie, like Atticus, has a strong sense of character; she is just more outspoken. By comparing and contrasting the two motherly figures in Scout's life, Harper Lee is making the point that there was a wide variety of people in both black and white communities. There were more traditional people as well as more liberal minded people. Grace Merriweather is another example of the white racist people in Maycomb. At first she seems like a good, religious person and is described as the "most devout in Maycomb". She pretends to care about other people and tribes in Africa like the Mrunas however she is a racist and refers to black people as "darkies". Heck Tate is the sheriff of Maycomb, who ultimately turns out to be honest and upstanding. Although he might not be as racist as the rest of the town, he wouldn't go out of his way to help a black man. ...read more.

He is moved by Scout's words when she tries to break the Lynch mob, and as a result he leads the rest of the men in going home. Dolphus Raymond is a white man who chose to marry a black woman and have "mixed" children. He pretends to be a drunk so that the townspeople will have a way to more comfortably explain his behaviour and life choices. People believe that alcoholism is why he lives the way he does rather than face the fact that he lives with coloured people because he wants to. Mr. Link Deas owns the cotton fields that Tom Robinson worked in. He stood up in court after Atticus questioned Tom, and insisted that Tom was a good man who'd worked for him for eight years and never caused "a speck o' trouble". When Bob Ewell starts threatening Helen after the trial, Mr. Deas fiercely defends her and threatens several times to have Mr. Ewell arrested if he keeps bothering her. All these different characters that Lee uses, contributes to the book being more believable. It shows the variation of people in all communities and how different people react in similar situations. ?? ?? ?? ?? ...read more.