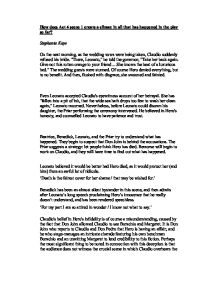 How does Act 4 scene 1 create a climax in all that has happened in the play so far?

How does Act 4 scene 1 create a climax in all that has happened in the play so far? Stephanie Kaye On the next morning, as the wedding vows were being taken, Claudio suddenly refused his bride. "There, Leonato," he told the governor, "Take her back again. Give not this rotten orange to your friend ... She knows the heat of a luxurious bed." The wedding guests were stunned. Of course Hero denied everything, but to no benefit. And then, flushed with disgrace, she swooned and fainted. Even Leonato accepted Claudio's eyewitness account of her betrayal. She has "fallen into a pit of ink, that the wide sea hath drops too few to wash her clean again," Leonato mourned. ...read more.

from an awful lot of ridicule. 'Death is the fairest cover for her shame / that may be wished for.' Benedick has been an almost silent bystander in this scene, and then admits after Leonato's long speech proclaiming Hero's innocence that he really doesn't understand, and has been rendered speechless. 'For my part I am so attired in wonder / I know not what to say.' Claudio's belief in Hero's infidelity is of course a misunderstanding, caused by the fact that Don John allowed Claudio to see Borachio and Margaret. It is Don John who reports to Claudio and Don Pedro that Hero is having an affair, and he who stage-manages an intricate charade featuring his own henchman Borachio and an unwitting Margaret to lend credibility to this fiction. ...read more.

This scene has been building up over several scenes, with conspiracies and hints towards disaster, but Beatrice and Benedick's long conversation at the end of the scene completes one good conspiracy, the one formed by Hero and Claudio to make Beatrice and Benedick fall in love, it worked and now Beatrice is making Benedick show his love by taking revenge for the wrong done to Hero. He promises to challenge Claudio, and attempt to kill him. This plan of theirs forms another plot in the already complicated system of trickery and backstabbing plans, making this scene the most action packed scene so far, as all the plots come to a conclusion, what makes it more interesting is that not everybody knows what is going on, the separation has become clear between good and evil, with only Claudio hovering in between these boundaries. 600 words ...read more.