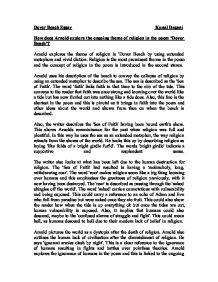 How does Arnold explore the ongoing theme of religion in the poem Dover Beach?

Dover Beach Essay Kunal Dasani How does Arnold explore the ongoing theme of religion in the poem 'Dover Beach'? Arnold explores the theme of religion in 'Dover Beach by using extended metaphors and vivid diction. Religion is the most prominent theme in the poem and the concept of religion in the poem is introduced in the second stanza. Arnold uses his description of the beach to convey the collapse of religion by using an extended metaphor to describe the sea. The sea is described as the 'Sea of Faith'. The word 'faith' links faith in that time to the ebb of the tide. This conveys to the reader that faith was once strong and looming over the world like a tide but has now fizzled out into nothing like a tide does. ...read more.

In this way he uses the sea as an extended metaphor, the way religion retracts from the shores of the world. He backs this up by describing religion as laying 'like folds of a bright girdle furl'd'. The words 'bright girdle' indicate a supportive and resplendent sense. The writer also looks at what has been left due to the human destruction for religion. The 'Sea of Faith' had resulted in having a 'melancholy, long, withdrawing roar'. The word 'roar' makes religion seem like a big thing looming over humans and this emphasises the greatness of religion previously, with it now having been destroyed. The 'roar' is described as passing through the 'naked shingles off the world'. ...read more.

Arnold also outlines the human lack of civilisation after the diminishment of religion. He says 'ignorant armies clash by night'. This is a clear reference to the ignorance of humans resulting in fights and battles over pointless theories. Arnold explores the ignorance of humans in the poem and this is linked to the ongoing theme of religion. He also exposes the lack of light and hope by using the words 'darkling pain' and 'night'. This emphasises the obscurity of sight In conclusion, the poem 'Dover Beach' explores different themes of religion as well as the role of art. Arnold very effectively uses his description of the beach to show what has been going on there and he also uses metaphors to alike human problems with the features of the beach, for example likening the sea to faith. ...read more.