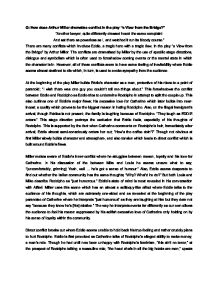 How does Arthur Miller dramatise conflict in the play &quot;a View from the Bridge?&quot;

Q: How does Arthur Miller dramatise conflict in the play "a View from the Bridge?" "Another lawyer, quite differently dressed heard the same complaint And sat there as powerless as I, and watched it run its bloody course." There are many conflicts which involves Eddie, a tragic hero with a tragic flaw, in the play "a View from the Bridge" by Arthur Miller. The conflicts are dramatised by Miller by the use of specific stage directions, dialogue and symbolism which is often used to foreshadow coming events or the mental state in which the character is in. However, all of these conflicts seem to have some feeling of inevitability where Eddie seems almost destined to die which, in turn, is used to evoke sympathy from the audience. At the beginning of the play Miller builds Eddie's character as a man, protective of his niece to a point of paranoid; "I wish there was one guy you couldn't tell me things about." This foreshadows the conflict between Eddie and Rodolpho as Eddie tries to undermine Rodolpho in attempt to split the couple up. This also outlines one of Eddie's major flaws; his excessive love for Catherine which later builds into near-incest; a quality which proves to be the biggest reason in hating Rodolpho. ...read more.

Though he had until now been unhappy with Rodolpho's feminism, "this ain't no tenor," at the prospect of Rodolpho talking a masculine role, "the head chefs in all the big hotels are men," upsets Eddie further. This results in him repeated making excuses; "I can't cook, I can't sing, I can't make dresses, so I'm on the water front." However, in a way, to recover his place as the masculine role in the family he offers to teach Rodolpho to box. Miller creates tension as the stage directions are for the characters to act mostly "uneasy" or "nervously happy." The suspense is further increased by Eddie's actions, stage directions which reveals Eddie's intentions in his offer; "weirdly elated, rubbing his fist into his palms." As they "lightly box" Catherine enters, and when she talks, immediately, lightly veiled by his "watch out" and his friendly "Danish," mildly staggers Rodolpho. However, unlike what Eddie had hoped to show his idea of masculinity, Marco challenges Eddie to a lift a chair, a show of strength, similarly how Eddie had challenged Rodolpho however without deception. However before judging Eddie's character, it is evident Miller evokes pity and sympathy in the audience; Eddie beyond the conflicts of his family and the immigrants is Eddie's struggle with fate, his almost destiny to betray and die. ...read more.

As Eddie finishes his second talk with Alfieri he heads towards the telephone booth; "follows into the darkness" which again alludes to the idea of no-escape and fate. After his betrayal he finds that there are two more immigrants. He tries his best to get them out; "Will you stop arguing with me and get them out?" however tragically this fails. Through the conflict between Eddie and Fate Miller portrays one of his main themes. "We settle for half and I like it better." It seems inevitably from the beginning that things would not go perfectly. The immigrants could not have all lived happily in America and Rodolpho could not have married Catherine without any problems. "Only God makes justice." The fact that it was of man and justice could not have been performed. That fate did not allow it and Eddie, though he did his best to resist, had to be sacrificed to "settle for half." This buys sympathy for him as a tragic hero with an inevitable fate. In summary, Miller has dramatised the conflicts in "a View from the Bridge" by stage directions, dialogue, and symbolism. Eddie, being a tragic hero, stuck on a path decided by him by fate is almost forced into conflicts with his family, which is used to evoke sympathy and finally to illustrate his theme of law and justice. 1283 words ...read more.