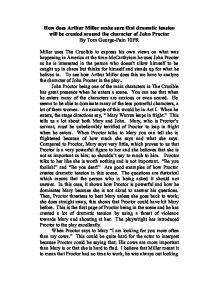 How does Arthur Miller make sure that dramatic tension will be created around the character of John Proctor.

How does Arthur Miller make sure that dramatic tension will be created around the character of John Proctor By Tom George-Pain 10PR Miller uses The Crucible to express his own views on what was happening in America at the time-McCarthyism he uses John Procter as he is interested in the person who doesn't allow himself to be caught up in chaos but thinks for himself and stands up for what he belives in. To see how Arthur Miller does this we have to analyze the character of John Procter in the play.. John Proctor being one of the main characters in The Crucible has great presence when he enters a scene. You can see that when he enters many of the characters are anxious or even scared. He seems to be able to dominate many of the less powerful characters, a lot of them women. An example of this would be in Act I. When he enters, the stage directions say, " Mary Warren leaps in fright." This tells us a lot about both Mary and John. Mary, who is Proctor's servant, must be unbelievably terrified of Proctor to leap in fright when he enters. When Proctor talks to Mary you can tell she is frightened because of how much she says and what she says. Compared to Proctor, Mary says very little, which proves to us that Proctor is a very powerful figure to her and she believes that she is not as important as him; so shouldn't say to much to him. ...read more.

Near the start of the play we work out that Abigail and Proctor had an affair. The readers were not actually told, we had to work it out from what they say e.g. Proctor says... "That's done with." As if they did have a relationship together and he wants to forget it. When Abigail says... " I'm waiting for you every night." Being the hero of the story, Proctor regrets doing it and tells Abigail to forget it because he has a loving family. Abigail was not happy about it so she decides to make Proctor unhappy throughout the whole play. Proctor knows that Abigail is pretending to see the devil and he gets very angry about it. In act III Proctor shouts "Whore whore!" at Abigail. He shouts this because Abigail accuses Mary of witchcraft. This get Proctor very angry, but what made him shout out was when she said, "Oh Heavenly Father". Proctor was angry because she had lied and betrayed God, but she tries to fake it and cries out to him. Abigail creates a lot of the dramatic tension around Proctor when she argues with him. As the readers, we know that Proctor is the good guy and Abigail is the bad guy. When Abigail and Proctor are near each other there is lots and lots of tension. Abigail using the whole situation of witch craft to her advantage, and being very manipulative and sly. ...read more.

It came from Miller's own ideas on capitalism and the American dream. It is all about the American dream and how different people accomplish it and their idea what it is. Miller condemns the American dream in the play. There are two characters that are both salesman and have achieved the American dream in way. One of them is very rich, while another is well off but has a family and is happy. Miller is trying to make a point that there are many ways to accomplish the American dream, not just wealth. In one of Miller's plays, "A view from a bridge", an immigrant want's to marry someone. Not because the immigrant loves them, but they will become an American citizen if they do. This play deals with the policy on immigration, which is still a problem today and the American dream. It is very hard to believe that someone would marry someone just to become an American citizen. Miller had strong opinions on this as well. Miller uses the Salem witch-hunt to put forward his views on McCarthyism-the hunting down and prosecuting of any Americans who were thought to have taken part in anti-capitalism. The accusations became hysterical and many people were asked to 'name names' of people in meetings held many years previously. Miller himself was brought before the committee led by Joseph McCarthy. Miller saw the public confessions required by the committee, as parallels with the naming of names at Salem in 1692. This incident relates to "The crucible" because anyone was accused because there was not sufficient evidence. ...read more.