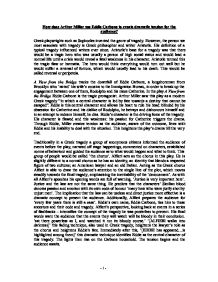 How does Arthur Miller use Eddie Carbone to create dramatic tension for the audience?

How does Arthur Miller use Eddie Carbone to create dramatic tension for the audience? Greek playwrights such as Sophocles invented the genre of tragedy. However, the person we most associate with tragedy is Greek philosopher and writer Aristotle. His definition of a typical tragedy influenced writers ever since. Aristotle's base for a tragedy was that there would be a tragic hero who was usually a person of high social status and would lead a normal life until a crisis would reveal a fatal weakness in his character. Aristotle termed this the tragic flaw or harmatia. The hero would think everything would turn out well but he would suffer a reversal of fortune, which would usually lead to his death. This would be called reversal or peripeteia. A View from the Bridge tracks the downfall of Eddie Carbone, a longshoreman from Brooklyn who 'ratted' his wife's cousins to the Immigration Bureau, in order to break up the engagement between one of them, Rodolpho and his niece Catherine. In the play A View from the Bridge Eddie Carbone is the tragic protagonist. Arthur Miller saw this play as a modern Greek tragedy "in which a central character is led by fate towards a destiny that cannot be escaped". Eddie is this central character and allows his heart to rule his head: blinded by his obsession for Catherine and his dislike of Rodolpho, he betrays and dishonours himself and in an attempt to redeem himself, he dies. Eddie's character is the driving force of the tragedy. His character is flawed and this weakness: his passion for Catherine triggers the drama. Through Eddie, Miller creates tension as the audience, aware of the outcome, lives with Eddie and his inability to deal with the situation. This heightens the play's drama till the very end. Traditionally in a Greek tragedy a group of anonymous citizens informed the audience of events before the play, narrated off stage happenings, commented on characters, established norms of behaviour and guided the audience as to what would happen and what to think. ...read more.

However, the audience now realise Eddie's dilemma is more deep rooted - his own family honour is at stake. Honour, another theme, must be maintained - insults to the family must be avenged. Eddie's honour is at stake, Rodolpho's 'quaintness', 'he ain't right', they're laughin' at him on the piers', 'I'm ashamed' is the part of the reason Eddie does not want Catherine marrying him, because if she does then Rodolpho will be family and 'they' would be laughing at Eddie too. 'When I think of that guy laying his hands on her I could - I mean it's eaten me out.' Eddie is at his wit's ends; he will do anything to prevent this, he's being consumed and cannot see sense. Miller uses Alfieri in his role as a lawyer as a dramatic device. He offers Eddie a lawful solution: he would get justice yet he would lose his honour. Alfieri is the first person to verbalise Eddie's predicament. 'She can't marry you, can she?' Eddie's response is primeval 'What the hell you talkin' about?' Yet again Eddie is singled out as the tragic hero 'a dark figure walking down the hall towards a certain door.' Alfieri's certainty of disaster is clear to the audience. Alfieri, now in chorus mode, repeats 'I knew, I knew then and there.' At this point the audience has no sympathy for Eddie's views on Rodolpho or his attempts to use the law against him but they sympathise with the sobbing, helpless man convinced his little girl is being stolen from him. Ironically Eddie predicts his own fate 'I'm a patsy'. Eddie realises he has to take the law into his own hands. He tries to humiliate Rodolpho to prove to Catherine that he is not a 'proper man'. He challenges Rodolpho to a boxing match. At first Rodolpho declines, which shows the audience he is trying to stay on Eddie's good side but finally he agrees. ...read more.

Eddie is confronted with his dishonourable actions and realises too late what he has done, but he never admits it, he just insists 'I want my name' 'Marco's got my name!' 'Eddie Carbone! Eddie Carbone! Eddie Carbone!' In Eddie's final speech he is almost hysterical as he fights for his name and he tries to redeem his honour, as a tragic hero should. Eddie' s death fulfils his destiny and Alfieri's 'bloody' conclusion is realised in a swift, dramatic fight. Eddie' s death is dramatic because the tension builds rapidly. Marco's impending arrival and Eddie's challenge to Marco both create tension. It is at this point the themes of the play: love, honour, family, justice and law all begin to fall apart because of the two men's pride. The audience experiences a true catharsis as they witness the hero's death. Alfieri's closing words remind them of his opening lines 'Now we settle for half, and I like it better'. This represents a compromise of people's hopes, desires, and sense of justice. I think, however, Alfieri respects Eddie and his needs to be true to himself 'not purely good, but himself purely'. Eddie behaved in the only way he knew how - instinctively and passionately. Despite his inevitable dishonour 'he allowed himself to be wholly known'. In my opinion Miller uses Eddie as a dramatic tool to get the audience thinking. He sets the question: Should we compromise our dreams and desires and 'settle for half' or be true to ourselves?' Eddie Carbone is a passionate, emotional man incapable of expressing or understanding his complex feelings. Eddie's simplistic yet complex nature results in him living on a knife-edge: he is the subject of the tragedy - the character who was singled out for the audience - he is the driving force of the play. Miller plays out the story using Eddie's conflicts, moods and passions. As Eddie is the tragic protagonist by rights, the audience lives through each and every one of Eddie's emotions, creating tension from the moment he walks on stage. Alex Kingcome 10:0 ?? ?? ?? ?? - 1 - ...read more.