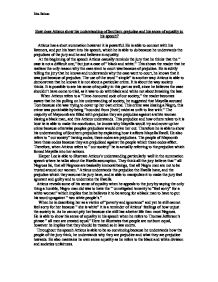 How does Atticus show his understanding of Southern prejudice and his sense of equality in his speech?

How does Atticus show his understanding of Southern prejudice and his sense of equality in his speech? Atticus has a short summation however it is powerful. He is able to connect with his listeners, and put his heart into his speech, which he is able to do because he understands the prejudices of the jury and he and believes in equality. At the beginning of the speech Atticus casually reminds the jury that he thinks that the " case is not a difficult one," but just a case of " black and white." This shows the reader that he realises the only reason why the case went to court was because of prejudice. He is subtly telling the jury that he knows and understands why the case went to court, he knows that it was just because of prejudice. ...read more.

The majority of Maycomb are filled with prejudice they are prejudice against a white woman kissing a black man, and this Atticus understands. This prejudice and how others relate to it is how he is able to make the conclusion, he knows why Mayella would try and cover up her crime because otherwise peoples prejudices would drive her out. Therefore he is able to show his understanding of Southern prejudice by explaining how it affects Mayella Ewell. He also refers to " our society" having codes, these codes are prejudices. The people of Maycomb have these codes because they are prejudiced against the people which these codes affect. Therefore, when Atticus refers to " our society" he is actually referring to the prejudice which forced Mayella into her actions. ...read more.

When he is describing her as a victim of "poverty and ignorance" and yet he still cannot feel sorry for her because " she is white" it is a reminder of Atticus' feelings of how unjust the society is. As he cannot pity her because she still has a better life than most Negroes. He is able to show his sense of equality in his speech when he refers to Thomas Jefferson's phrase " all men are created equal." Here he illustrates that people are not born equal, however he implies that they should be treated so in law courts. Throughout the speech Atticus is able to be so convincing because he understands how the people of the jury think, he understands why they are prejudice and what they are prejudice towards. He also maintains he own sense equality as he refers to the black and white division and societies unfairness. ?? ?? ?? ?? Rita Bulusu ...read more.