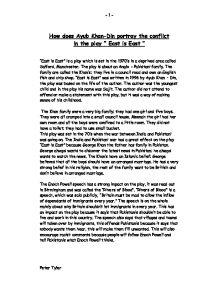 How does Ayub Khan-Din portray the conflict in the play &quot; East is East &quot;.

How does Ayub Khan-Din portray the conflict in the play " East is East " "East is East" is a play which is set in the 1970's in a deprived area called Salford, Manchester. The play is about an Anglo - Pakistani family. The family are called the Khan's; they live in a council road and own an English fish and chip shop. "East is East" was written in 1996 by Ayub Khan - Din, the play was based on the life of the author. The author was the youngest child and in the play his name was Sajit. The author did not attend to offend or make a statement with this play, but it was a way of making sense of his childhood. The Khan family were a very big family; they had one girl and five boys. They were all cramped into a small council house. Meenah the girl had her own room and all the boys were confined to a little room. They did not have a toilet; they had to use small bucket. This play was set in the 70's when the war between India and Pakistani was going on. The India and Pakistani war has a great effect on the play "East is East" because George Khan the father has family in Pakistan. ...read more.

This is just one way which they are in conflict with there father George. Another time is when Saleem stands up for the family. Saleem says to George that he doesn't think it is the right time for Abdul and Tariq to get married. George gets very irritated and starts to threaten Saleem, Saleem says "I'm not Pakistani, I was born here, I speak English, not Urdu." George says "Do you want choose like Nazir, han? Lose everything, go with bloody English girl? They not good, go with other men, drink alcohol, no look after." This is very ironic because George marries an English woman. Saleem then hits a raw nerve of Georges, He replies "Well if Pakistani women are so great, why did you marry me mam"? George grabs him, and pushes him on the ground and kicks and slaps him. George leaves Saleem lying on the floor crying. At the time of this play the India, Pakistan war was going on. This causes a lot of conflict between George and Indians because he believes that Pakistanis are the good ones and Indians are the bad ones. He also believes that the whole world is against Pakistan. George is Nationalistic about his country; he believes that Pakistan is better than any other country. He believes that every country is wrong and Pakistan is right. ...read more.

George and Ella have six children, all of them are against George accept Maneer. Maneer is the goody - goody out of them. He is too scared to rebel against his father. Maneer is George's favourite child because he is a strict Muslim; the family call him Ghandi because he is a religious leader. Another goody - goody is Abdul; he doesn't go partying like the rest he stays in. By the end of the play Abdul becomes more self-assured and confident. He goes to the pub for the first time ever. At the pub people are making racist jokes against Pakistanis, Abdul is laughing at the time. When he gets home he regrets laughing at the jokes. After the pub Tariq and Abdul were arguing, Tariq calls Abdul pathetic because he doesn't want to run away and live with Nazir. (Who also ran away because George arranged a marriage for him) Abdul says that he can't live without a family around him, Tariq thinks this is pathetic. I think that Ayub Khan - Din was very successful at portraying the conflict in the play "East is East". He created some very good conflicts. This play has a very compact story; this is probably because the play is about his life. I think that the play goes into great detail and provides many disagreements between the Khan family. The conflicts are about many things including; there religion, there race, there dad and so on. - 1 - Peter Tyler ...read more.